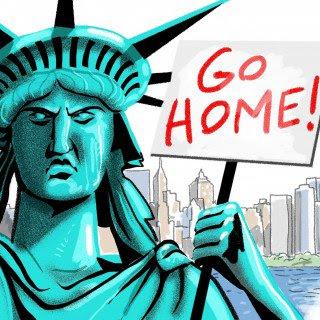 For the first time in a decade, the United States was crowned the world’s most competitive economy by the organisation behind the Davos economic forum.

The World Economic Forum on Wednesday released its latest global competitiveness report, which looked at 140 economies based on 98 wide-ranging social, political and economic factors. The organisation assessed a variety of metrics, including infrastructure, information and communications technology, macroeconomic stability, health, skills and labour market. Economies were given scores out of 100.

The US took the top slot with a score of 85.6, buoyed by its capacity for innovation, evident in its high scores in business dynamism and entrepreneurial culture. The report also highlighted the nation’s strong labour market and financial system.

In second place was Singapore (83.5), heralded for its infrastructure and openness as a global trading hub, followed by Germany and Switzerland, which was the top-ranked economy last year.

Hong Kong placed seventh, down one place from last year, with Taiwan in 13th place, up two slots.

Russia and China were the only emerging markets that placed in the top 50. China was in 28th place – down one slot from last year – with Russia ranked 43rd. India was 58th.

But the authors warned that the US economy was under threat from a “weakening social fabric,” corruption and security and IT issues. It also pointed out that the United States was far behind most advanced economies in health, with life expectancy six years behind competitors Singapore and Japan, which ranked fifth on this year’s list.

Regionally, more countries in East Asia and the Pacific were ranked as more competitive than European countries.

The WEF adapted the report, which it has put out for 40 years, to account for the importance of technology as an economic driver in the modern era, which WEF refers to as “the Fourth Industrial Revolution”.

The organisation’s report introduced new indicators to measure cultural factors that feed growth and innovation, such as entrepreneurial culture, embracing disruptive ideas, critical thinking and social trust, factors that were weak across the board, the report’s authors warned. It also focused on the importance of resiliency, agility and human capital.

“With opportunities for economic leapfrogging, diffusion of innovative ideas across borders and new forms of value creation, the Fourth Industrial Revolution can level the playing field for all economies,” Saadia Zahidi, a WEF managing board member, said in a news release. “But technology is not a silver bullet on its own. Countries must invest in people and institutions to deliver on the promise of technology.”