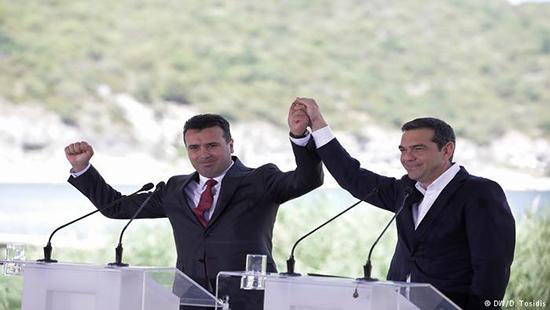 Greece’s coalition government appears to be unravelling after the foreign minister resigned over the name-changing deal with neighboring Macedonia. Tsipras is under pressure from a key coalition ally.

Greek Foreign Minister Nikos Kotzias resigned on Wednesday after reports of a clash with Defense Minister Panos Kammenos over the agreement made with neighboring Macedonia for a name change.

Saying he would take over his top diplomat’s portfolio, Prime Minister Alexis Tsipras also said he was determined to safeguard the deal he signed with Macedonia agreed last June. In this, Greece’s northern neighbour was to change its name to North Macedonia, thus ending a dispute with Greece and opening up the way for EU and NATO membership.

Tsipras said in Athens on Wednesday: “I am determined to do whatever I can (to) safeguard the successful conclusion of the historic Prespes agreement.” However, the future of the deal looked uncertain following a referendum in Macedonia failed to reach a minimum turnout. This means it is not yet constitutionally valid.

Macedonian Prime Minister Zoran Zaev faces a challenge in obtaining the necessary two-thirds majority in the Skopje parliament to amend the constitution and thus gain Macedonia’s agreement to the deal.

On Wednesday, the assembly entered its third day of a debate on whether to approve the deal.

Nationalist opposition leader Hristijan Mickoski told DW that he considered the deal with Greece to be “dead” and asked the government to halt the parliamentary procedure. His VMRO party had abstained from the referendum.

The agreement effectively ended a 27-year-long dispute between the neighbors. The Greek side had maintained that using the name of Macedonia implied a territorial claim to part of its northern territory.

Right-wing nationalist Kammenos has spoken out strongly against the deal: “I won’t vote for this deal if it comes to parliament,” he said recently. Kammenos and his party believe that Macedonia is historically Greek, and part of Greek heritage.

“If the parliamentary majority decides a divorce, so be it, there will be one,” Kammenos warned. He also heads the coalition’s junior party, Independent Greeks, which has 7 seats in parliament. Tsipras survived a vote of no-confidence earlier in the year over the deal.

The term of the Tsipras coalition government runs until the end of 2019 but the participating parties account for just 153 seats in the 300-place parliament. Should Kammenos lead his group out of the coalition, Tsipras may find it difficult to replace them.

There are independent and center-left lawmakers not currently in the coalition. Government officials on Wednesday said their support was in the process of being secured.