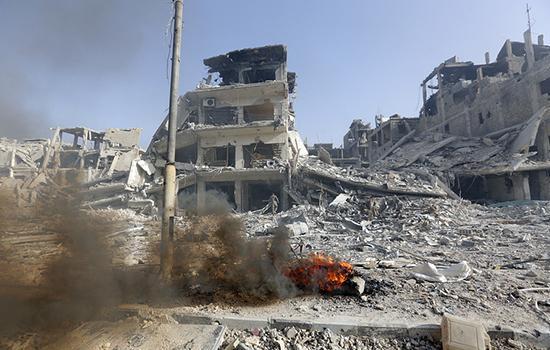 MOSCOW, October 17. /TASS/. The Islamic State terrorist group (outlawed in Russia) has taken more than 700 hostages in the Syrian region of Deir ez-Zor, among them citizens of Western European and other states, a military diplomatic source said on Wednesday.

Terrorists attacked a refugee camp in the area controlled by the US-led coalition forces, he added.

“Taking advantage of their impunity, the Islamic State militants carried out an attack on the refugee camp located near the populated locality of al-Bahra on October 13. As a result, they took hostage and transported about 130 Arab families to [the city of] Hajin which is under their control,” the source said.

According to him, “among the Islamic State hostages in that area are more than 700 people, including citizens of Western European and other countries.”

Militants demand that Syrian Democratic Forces fighting on the side of the US-led coalition release captured IS terrorists and concede several territories on the eastern bank of the Euphrates River. The Islamic State will execute hostage every day until their demands are met, the source said.

“Today’s incident in the settlement of Hajin is a good example of that. Because of unprofessional actions of US Air Force, a Kurdish unit that was trying to launch an offensive at IS, was subjected to airstrikes from two F-15 fighter jets from the coalition forces. Six Kurdish fighters died, and 15 more sustained serious injuries,” the source added.

According to the source, the offensive was thus disrupted, and IS took control over the area. The failure of the operation was exacerbated by mass desertion from the ranks of the Syrian Democratic Forces, he added.