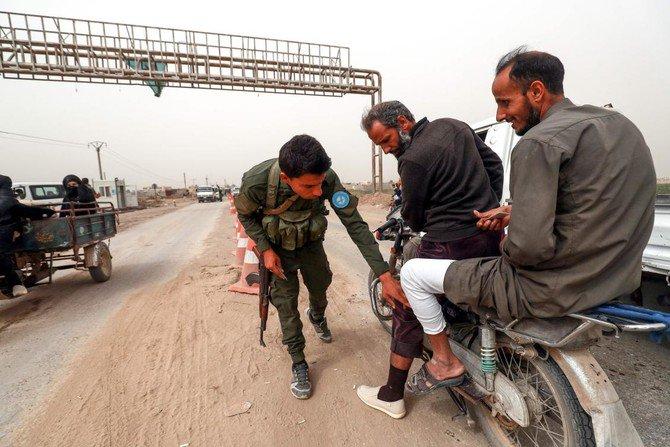 RAQQA, Syria: A year after a US-backed alliance of Syrian fighters drove the Daesh group from the northern city of Raqqa, traumatized civilians still live in fear of near-daily bombings.
“Every day we wake up to the sound of an explosion,” said resident Khaled Al-Darwish.
“We’re scared to send our children to school … there’s no security,” he added.
The militants’ brutal rule in Raqqa was brought to an end in October 2017 after a months-long ground offensive by the Kurdish-led Syrian Democratic Forces supported by air strikes from a US-led coalition.
But despite manning roadblocks at every street corner, the SDF and the city’s newly created Internal Security Forces are struggling to stem infiltration by Daesh sleeper cells.
At Raqqa’s entrance, soldiers verify drivers’ identity papers and carefully sift through lorry cargoes.
Inside the city, there are regular foot patrols and armored vehicles sit at strategic points.
Women wearing the niqab are asked to show their faces to female security members before entering public buildings.
“If there wasn’t fear about a return of Daesh, there wouldn’t be this increased military presence,” said Darwish, a father of two, speaking near the infamous Paradise Square.
It was here that Daesh carried out decapitations and other brutal punishments, earning the intersection a new name — “the roundabout of hell.”
While the nightmare of militant rule may be gone, most of the city still lies in ruins and there are near daily attacks on checkpoints and military vehicles, according to the Syrian Observatory for Human Rights.
Although a series of stinging defeats have cut Daesh’s so-called caliphate down to desert hideouts, the militants still manage to hit beyond the patches of ground they overtly control.
Some Raqqa residents say the city’s new security forces lack the expertise to cope.
“We are exhausted. Every day we don’t know if we will die in a bomb explosion or if we will go home safe and sound,” said Abu Younes, sitting in his supermarket near a roundabout not far from Paradise Square.
“There is no security — (the new security forces) on the roadblocks are not qualified and there is a lot of negligence,” he complained.
“There are faults that enable Daesh to infiltrate the city easily and carry out attacks.”
But despite the continued attacks, a semblance of normal life has returned to the city.
Shops have reopened and traffic has returned to major roads — albeit choked by the impromptu checkpoints.
In a public garden, children climb up a multi-colored slide and onto dilapidated swings as their mothers sit on nearby benches carefully keeping watch.
They are set amidst an apocalyptic backdrop of twisted metal and splayed balconies — the remnants of buildings torn apart by US-led coalition air raids.
Nearby, Ahmed Al-Mohammed pauses as he listens to music on his phone. Like others, he does not hide his disquiet.
“We’re scared because of the presence of Daesh members in the city,” the 28-year-old said.
“The security forces need to tighten their grip.”
Ahmed Khalaf, who commands Raqqa’s Internal Security Forces, defended the work of his men and claimed successes against the militants.
He said patrols are highly organized and that a “joint operation cell” had recently been established with coalition forces to monitor the city’s security.
“Recently we arrested four (militants) — it was a cell that took part in attacks that terrorized the city,” said Khalaf, sporting plain green fatigues.
“We are continuing our investigation to uncover the other cells,” he added.
“Daesh’s goal is to destroy the country and to not let anyone live in safety,” he said.
Security and stability are what Najla Al-Ahmed wants most for her children.
“The nightmare of Daesh follows us everywhere — whenever we try to rest, explosions start up again,” said the 36-year-old, as she shopped with her young ones.
“The war has worn us out. Us and our children. It has destroyed our future,” she said.