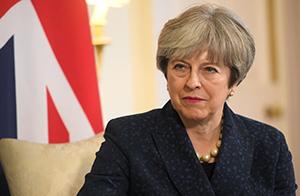 While Britain and the EU say they want to reach a deal, preparations are taking place for what happens if they cannot agree by the time the UK leaves the EU on March 29, 2019.

British Prime Minister Theresa May left the Brexit talks in Brussels without saying a word to the press.

The first part of the European Council’s meeting in Brussels on Wednesday focused on issues pertaining to Britain’s withdrawal from the European Union. Briefing the media ahead of the meeting, most of the participating European leaders were cautious about the prospects of a quick agreement.

After the meeting Theresa May, accompanied by members of her negotiating team, quickly left the European Council’s headquarters through the front door and, without saying a single word to reporters, departed in a motorcade provided by the meeting’s hosts.

EU: May Offers ‘Nothing New’ to Negotiations

Briefing reporters ahead of Wednesday’s session, Theresa May said she was optimistic about the chances of achieving a divorce agreement with the EU, including on the thorny issue of the N. Irish border.

She added that she hoped to convince her counterparts to back her Brexit plan and that “considerable progress” had been made in recent weeks.

Speaking after the meeting, Antonio Tajani, president of the European Parliament, said that the British PM had offered “nothing new” in terms of substance.

“There was a message of goodwill and readiness to reach an agreement, but I didn’t perceive anything substantially new in terms of content,” Tajani added.

Earlier, Theresa May and Labour leader Jeremy Corbyn clashed over Brexit with the prime minister rejecting his claim that her planned long-term relationship with the EU, known as the Chequers plan, was “dead.”

Meanwhile, Germany and France are stepping up their preparations for a no-deal Brexit even though both publicly insist an agreement with the UK over the terms of its departure from the EU can still be achieved.

Angela Merkel revealed for the first time on Wednesday that Germany was drawing up contingency plans, saying the government had started making “suitable preparations” for the possibility of Britain leaving with no accord.

France, for its part, has published a draft bill that would allow the government to introduce new legal measures to avoid or mitigate the consequences of a hard Brexit by emergency decree, as opposed to a parliamentary vote, within 12 months of the law being passed.