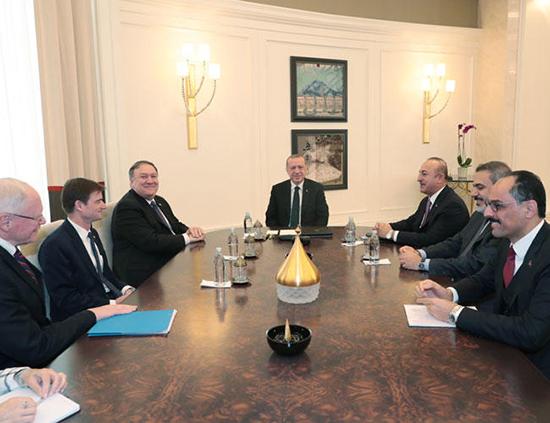 President Recep Tayyip Erdoğan told U.S. Secretary of State Mike Pompeo that Turkey could easily clear the northern Syrian city of Manbij of the YPG if the United States failed to do so, Foreign Minister Mevlüt Çavuşoğlu has said.

“Turkey is ready to “eliminate terrorists in Syria’s Manbij if the U.S. is facing difficulties,” çavuşoğlu told reporters following his meeting with U.S. Secretary of State Mike Pompeo in Ankara. Pompeo also heled a meeting with Erdoğan at the Eserboğa airport on Oct. 17.

“We have discussed the issue of (Jamal) Khashoggi and Manbij. It was a fruitful discussion. We have exchanged views on many issues including the fight against PKK,” Çavuşoğlu told reporters.

“We have consensus that there is no room for sanctions anymore in our bilateral relations,” he noted.

The US side also accepted that the agreement with Turkey to clear Manbij of the YPG had been delayed, the minister said.

Foreign Minister Mevlüt Çavuşoğlu and U.S. Secretary of State Mike Pompeo brokered a deal on June 4, which sought the withdrawal of the YPG, the Syrian offshoot of the illegal PKK, from Manbij and the joint control of the city by Turkish and American troops. The process had to be completed on Sept. 4, but Turkish and American troops could not yet begin joint patrolling missions due to the delayed training of the two sides’ militaries in the region.

U.S.-Turkish relations have been strained over the detentions as well as other issues, and Washignton has imposed sanctions on Ankara over detention of a US pastor.

“We have consensus that there is no room for sanctions anymore in our bilateral relations,” Çavuşoğlu said referring to recent tension. Detention of US Pastor Andrew Brunson, a case which led to American sanctions on Ankara, was at the heart of recent disputed between the two NATO allies. He was released on Oct. 12 and returned to the United States.

Meanwhile, Pompeo urged Turkey to release a Turkish-U.S. citizen and former NASA scientist, among other detainees, days after Ankara turned over U.S. evangelical pastor Andrew Brunson. He raised the issue to the Minister Çavuşoğlu, the U.S. State Department said in a statement.

“The Secretary also discussed with Foreign Minister Çavuşoğlu the continued wrongful detention of Dr. Serkan Gölge and other U.S. citizens as well as locally employed staff from U.S. Mission Turkey,” department spokeswoman Heather Nauert said in a statement on Oct. 17.

Gölge was visiting family in southern Turkey when he was arrested in a crackdown following a failed military coup in 2016 which the government blamed on supporters of U.S.-based Muslim cleric Fethullah Gülen. He has denied the charges. His sentence last month was reduced to five years amid thawing ties between Ankara and Washington.

Meanwhile, James Jeffrey is having discussions with the foreign ministry and military officials on Oct. 17-18 and also will meet representatives of Syrian opposition, a Turkish official told Hürriyet Daily News.