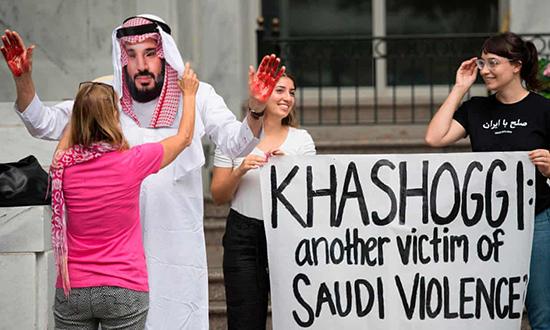 The alleged killing of the royal court insider turned journalist Jamal Khashoggi has rightly triggered a diplomatic crisis for Saudi Arabia, but it would appear it has not jeopardised any of the multibillion-dollar arms deals between the US, Britain and the House of Saud.

Many journalists working on the story, business people pulling out of Saudi conferences and politicians preparing diplomatic responses knew Khashoggi personally. He was a fixture of the thinktank circuit and a habitué of elite London and Washington parties. His former colleagues feel genuine empathy for Khashoggi over his apparently grisly end, because it requires little imagination for them to put themselves in his shoes.

Yet these influencers appear to have a blind spot for the more routine victims of unchecked Saudi aggression. Unlike Khashoggi, the thousands of Yemeni civilians who have been blown up by the Saudi royal air force do not write for the Washington Post.

Reports of an airstrike claiming the lives of at least 20 members of a wedding party, or 40 children killed when a Saudi bomb hit their school bus, may prompt a story in a national newspaper and perhaps a handwringing statement expressing “concern” by a foreign minister.

The deaths are instead explained away. Saudi Arabia is fighting for the legitimate government of Yemen. Ancient sectarian strife is causing the conflict. Saudi is acting in self-defence. “Our coalition,” as Conservative MP Crispin Blunt put it, is “trying to do the job of the international community”.

These talking points, at best fallacious, are often designed to whitewash the internalisation of a war in which Britain – through its ongoing supply of arms, technicians and military personnel – is an active participant.

The violence enacted by Saudi Arabia on the people of Yemen springs from the same source as the violence allegedly used against Khashoggi in the Turkish embassy. Both are colossal, tragic, strategic errors involving the deployment of unimaginable violence in a vain attempt to cow the imagined enemies of the Kingdom.

The conflict at its heart has been driven by a local fight between the former president, Ali Abdullah Saleh, and his vice-president, Abd Rabbu Mansour Hadi, who ousted him following the Arab spring.

This is where it should have ended. Instead, Saudi Arabia weighed in on the side of Hadi against Saleh, with the military support of Britain and US, making their war our war. Saleh in turn was backed – until his assassination in December 2017 – by the Houthis, a militia representing about a quarter of Yemenis, who are motivated by an array of domestic grievances, including the spread of sectarian Saudi Salafi schools within their communities.

The internationalisation of the conflict has reaped untold destruction on every social group in Yemen.

The bombing campaign launched by Saudi’s de facto leader, crown prince Mohammed bin Salman, is responsible for most of the deaths, as well as an impending famine that may affect up to 13 million people. Britain supplies the arms and the soldiers to coordinate the kingdom’s air war, which has targeted schools, hospitals, refugee camps, ports, aid distribution centres and other essential civilian infrastructure, according to the UN and other credible observers.

A report by Martha Mundy of the World Peace Foundation demonstrates how Mohammed bin Salman targets Yemen’s sparse arable land, fishing sites, food processing and storage facilities. The war has created power vacuums that have been filled by al-Qaida. The Houthis have reached out for support from Iran to fight back, often in clear violation of international humanitarian law.

Britain should have immediately objected to the internationalisation of this war. Instead it sent military personnel and continues to flout its own legislation by approving billions of pounds of arms sales to help Saudi Arabia fight. The vast majority of editors and business people who have been so animated by the murder of Khashoggi have been totally silent over Britain’s escalation of the war in Yemen.

If the alleged assassination of one man can unify the world against Saudi aggression, why not the preventable deaths of hundreds of thousands of Yemenis? Over the coming months we should keep in mind what an international pursuit of justice for the victims of criminal violence can achieve.

Lloyd Russell-Moyle is a Labour MP for Brighton, Kemptown and member of the Commons committee on arms exports controls