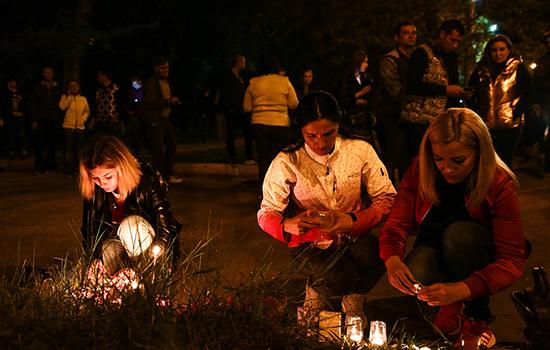 MOSCOW, October 18. /TASS/. World officials have expressed condolences over the shooting and explosion at the Kerch Polytechnic College in Crimea that claimed the lives of 19 people.

Italy’s Deputy Prime Minister and Interior Minister Matteo Salvini has extended his condolences “to the authorities and to the families of those who died in the shooting” when speaking at the council of Russian representatives at the Association of Entrepreneurs and Industry of Italy “Confindustria Russia.”

Secretary General of the Council of Europe Thorbjorn Jagland “has extended his condolences to all close to the victims of the killing in Crimea today,” his spokesperson Daniel Holtgen wrote on his Twitter account. “This is so tragic, devastating. Nothing is more important than the lives of our young ones,” Jagland was quoted by Holtgen as saying.

Estonian Prime Minister Juri Ratas has also expressed condolences to the families and friends of victims of the college shooting in the Crimean city of Kerch.

“My deepest condolences to families and friends of those who died as a result of the tragedy in Crimea,” Ratas wrote on his Facebook account on Wednesday. “I wish swift recovery to those who were injured.”

Finland’s Foreign Ministry has released a statement expressing “our deepest condolences to the families of victims of today’s horrible tragedy in Kerch.” The ministry also wished full and swift recovery to all those injured in the incident.

The Foreign Ministry of Thailand said they “regret the deaths and sympathize with the families of the victims,” the ministry’s official spokesperson Busadee Santipitaks said.

Venezuela has expressed condolences to Russia over the shooting and explosion at the Kerch Polytechnic College in Crimea. “The government of Venezuela, together with its people, expresses its sincerest condolences to the families of victims, to President Vladimir Putin and to the whole nation of the Russian Federation, and wishes soonest recovery to those injured,” the Venezuelan Foreign Ministry said on Thursday.

Presidents of Abkhazia and South Ossetia Raul Khadzhimba and Anatoly Bibilov have expressed their condolences over the Kerch tragedy to Russian President Vladimir Putin.

“The whole Abkhaz nation and me personally are struck by the Kerch college tragedy which took the lives of innocent people. I express deepest condolences to the families and friends of victims. I ask you to pass to them my words of sympathy and support, and I wish everybody who was injured soonest recovery,” the statement released by the press service of Abkhazia’s president said.

Bibilov said in a statement released by his press service that “the news about a horrible tragedy at the Kerch Polytechnic College that claimed the lives of so many, has resonated with paing in our hearts, filling them with sorrow and compassion.”

On Wednesday, a student opened fire and orchestrated an explosion at the Kerch Polytechnic College in Crimea. He later committed suicide. According to the latest reports, 19 people died and over 50 were injured in the attack. The criminal case was initially opened over an act of terrorism, but was later reclassified as murder. A three-day mourning will start in Crimea on Thursday.