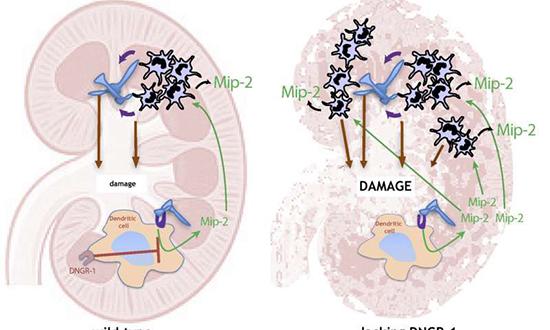 After infection or tissue injury, the inflammatory immune response attacks the infection and repairs the damaged tissue. However, sometimes excess inflammation can have the opposite effect, increasing injury in a process known as immunopathology. Now, researchers at the Centro Nacional de Investigaciones Cardiovasculares (CNIC) have discovered a new inflammation control mechanism that shows how the damage caused by the immune response can be controlled. The study is published today in Science.

Inflammation is a defense mechanism that facilitates the recruitment of immune cells to the injury site: for example, the pancreas during pancreatitis, the kidney after a Candida albicans fungal infection, or the heart during a myocardial infarction. The function of these immune cells is to eliminate the source of injury that provoked the inflammation and to contribute to tissue repair.

Lead author David Sancho says, “The first immune cells to arrive at the infection or inflammation site are the neutrophils, and these cells are tasked with eliminating the source of the problem. However, neutrophils are very destructive and not only act on the infecting pathogen, but also damage the infected tissue. This tissue damage caused by our own defense system is known as immunopathology. It is therefore important to understand how our immune system can control the neutrophil inflammatory response to prevent it damaging our own tissues. The current study shows that tissue infiltration by neutrophils is controlled by dendritic cells. These cells are more well known for the essential role they play in directing the specific responses of T lymphocytes. The new study shows that dendritic-cell regulation of neutrophil infiltration helps to avoid excessive tissue injury.”

A new mechanism in the control of inflammation Credit: CNICNeutrophils

Co-first author Carlos del Fresno says, “Dendritic cells attract neutrophils to the inflammatory focus by releasing factors such as the chemokine Mip-2. At the same time, these cells also express the surface receptor DNGR-1. This cell-surface molecule detects tissue injury by identifying cell components that become accessible only when the cell is damaged or ‘broken’. When DNGR-1 detects damaged tissue, it reduces the capacity of the dendritic cell to produce Mip-2, thus limiting neutrophil infiltration to the damaged organ. This mechanism prevents what could otherwise be a life-threatening expansion of tissue injury.”

Paula Saz, the other co-first author on the study, emphasized the importance of understanding immune system regulation, both as a positive response, favoring the fight against infection or cancer and promoting tissue repair, and in its negative manifestations that can cause excessive inflammatory injury during infection, as well as allergic reactions or major autoimmune diseases. “This balance always exists in the immune system, and learning how to control it is the key to the fight against many diseases with an immune component.”

The research was conducted in mouse models, the only experimental system that reproduces the complexity of the infections and inflammatory processes studied. These models can provide important insight into how to regulate the injurious immunopathological responses generated by our own defense systems. According to the CNIC researchers, knowledge in this area would be especially applicable to diseases featuring massive neutrophil infiltration, whether as a response to infection or to tissue injury, for example as occurs in a heart attack.