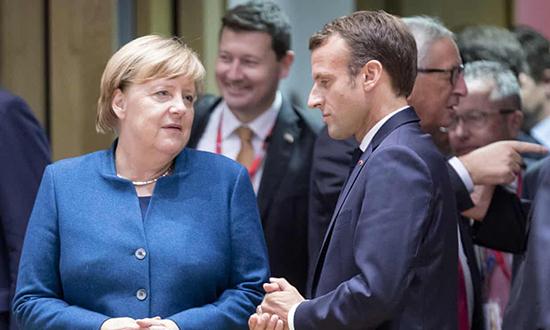 EU leaders are preparing to back Theresa May in building a “coalition of the reasonable” in the UK parliament, in a desperate bid to avoid a no-deal Brexit.

Following what has been described by diplomats as a “call for help” by the prime minister at a crunch summit in Brussels, the German chancellor, Angela Merkel, stressed that the EU had to pursue “all avenues” to find a deal that can get through the Commons.“I think where there is a will there is a way,” she said.

Jean-Claude Juncker, the European commission president, said: “It will be done.” He is understood to have told EU leaders that May needed “help” to sell a deal in parliament.

While ruling out major concessions, Emmanuel Macron, the French president, said it was clear that the roadblock to a deal did not lie in Brussels.

A potential agreement had been derailed on Sunday when Dominic Raab, the Brexit secretary, made an unscheduled visit to Brussels to inform the EU’s chief negotiator, Michel Barnier, that May could not get an agreement past her cabinet or the DUP, on whose votes her government relies.

Why extend the Brexit transition period?

Tory whips are now seeking to win over enough Labour MPs to outnumber hardline rebels, and are set to urge them to act in the “national interest” rather than risk the potentially severe economic consequences of no deal.

“It’s no longer a technical issue, it’s for the political ability of the UK to reach an agreement that can be presented to us,” Macron said. “Mrs May has been extremely committed and I’m convinced she will work in finding a political solution to get back to the EU negotiators.”

Under the EU’s plan to help May sell a deal, negotiations on an all-UK customs union are to be intensified, with a reference to future negotiations on its terms likely to be included in the withdrawal agreement.

Donald Tusk, the European council president, also said that EU leaders would wave through any request by the UK for an extension of the 21-month transition period.

They would do so in the hope that it will offer reassurance that the backstop solution, in which Northern Ireland remains in the customs union and single market as the rest of the UK withdraws, never comes to pass.

“If the UK decided that an extension of the transition period would be helpful to reach a deal, I am sure that the leaders would be ready to consider it positively,” Tusk said.

“This prolongation of the transition period probably will happen,” Juncker added. “It is a good idea. It is not the best idea the two of us had but it is giving us some room to prepare the future relationship in the best way possible.”

Tusk and Juncker refused to comment on the potential cost to the British taxpayer of a prolonged transition period – the prospect of which has sparked a furious backlash among Tory Brexiters.

But speaking at a press conference in Brussels, May seized on the positive comments of the EU leaders.

Asked whether the deadlock could be broken in time for a deal to be ratified in parliament, she said: “We’re intensifying the work on these issues that remain, and what I heard from leaders around the table, over the last hours since I have been around in Brussels yesterday, is a very real sense that people want that deal to be done.

“And I think if you look at some of the comments that have been made, Chancellor Merkel said, where there’s a will, there’s normally a way; Jean-Claude Juncker said let’s focus on the large areas where there is agreement.”

Brussels is continuing to insist on an “all-weather” solution in the withdrawal agreement that would keep Northern Ireland in the EU’s orbit should a trade deal or bespoke solution not be available by the end of the transition period in December 2020.

Following a meeting with May, the Irish taoiseach, Leo Varadkar, said the two leaders had been “in broad agreement” that the backstop insurance plan “would have to apply unless and until there is a new agreement between the EU and the UK to supersede it”, quoting wording used in a previous agreement between the EU and British government. “I was very reassured that the prime minister didn’t attempt in any way to row back on those commitments, which the UK made back in March.”

May’s promise of an open-ended backstop – an insurance plan to prevent the return of a hard border on the island of Ireland – will infuriate Brexiters and the DUP, who have threatened to remove their support for the government.

It is hoped, however, that a commitment within the withdrawal agreement to negotiating a customs deal along with the offer of a transition extension if required, can persuade Labour MPs, in particular, about the merits of a deal.

In a recent meeting with Jeremy Corbyn, Barnier told the Labour leader that nothing signed today on the future trade deal would tie his hands should there be a general election during a transition period.

Varadkar said: “We are all politicians and we do understand that May has to get a deal that she can get through Westminster.”

Juncker is understood have responded to May’s “nervous” 15-minute appeal on Wednesday evening by urging the leaders to “help” the prime minister, after she had spelled out the seriousness of her position at home.

A senior EU diplomat said that such were May’s nerves, Merkel had struggled to understand some of the address.

But EU officials have described the current hiatus in the negotiations since Sunday’s visit by Raab to Brussels merely as a “pause”, and stressed that they are acutely conscious of the political pressures May faces at home.

Asked whether she was confident of getting a deal to take back to parliament, given the lack of progress, May said: “There’s a real sense that what we’re doing is working to ensure that we can do this deal within a reasonable timetable. I’m very aware of the legislative requirements we have in the House of Commons and the period of time that will take.”

May’s political conundrum was underlined by the furious reaction back home to news that she is prepared to consider an extension to the post-Brexit transition period – aimed at allowing enough time for a UK-wide solution to be negotiated and implemented.

David Davis, the former Brexit secretary, said the idea was “unwise” and it was the wrong time to “take the pressure off” in the negotiations. European Research Group chair Jacob Rees-Mogg asked: “Why is this government so wet?”

Another former minister, Nick Boles, described any attempt to extend the transition period as a “desperate last move” and said May was losing the confidence of her party. He told BBC Radio 4’s Today programme on Thursday that the EU was demanding “humiliating concessions”.

“I’m afraid she is losing the confidence now of colleagues of all shades of opinion, people who have been supportive of her throughout this process.”

The DUP’s deputy leader, Nigel Dodds, said an extension “offers nothing significant on the key issue of the unacceptable EU backstop proposals”.