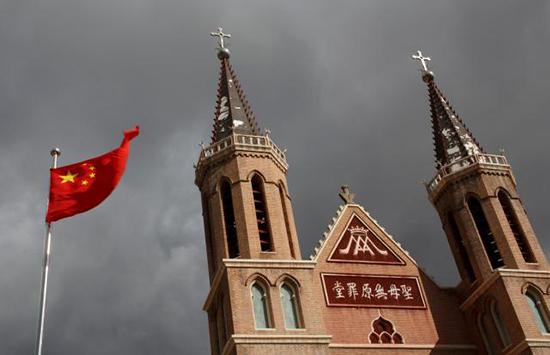 DONGLU VILLAGE, China (Reuters) – In 1996, a tiny village with a huge Gothic-style church in China’s Catholic heartland of northern Hebei province was the scene of a tense stand-off between the ruling Communist Party and the faithful.

Authorities surrounded Donglu village’s Our Lady of China Catholic Church, blocking thousands of pilgrims and detaining Vatican-ordained Bishop Su Zhimin, who was a member of the “underground” Church, not the state-backed official Church which did not recognize the pope’s authority to name bishops.

Despite repeated appeals to Chinese authorities from Vatican officials and underground clergy, it is unclear whether Su, who would now be 86, is still being held or is even alive.

Decades on, the Donglu church’s ties with officials are now convivial, according to Diao Ligang, a local priest, reflecting a generational shift toward acceptance of the ruling Communist Party’s authority over China’s Catholics.

“Before, it was as if they kept wanting to see what we were hiding in our fist,” said Diao. “But then we opened it and they realized there was nothing dangerous in there in the first place.”

Last month’s secretive deal with the Vatican, which gives the Holy See a long-sought and decisive say over the appointment of new bishops, sets the stage for Beijing to recognize some underground congregations. Details of how and when this process might happen have not been released.

Interviews with five underground priests and two dozen believers in Hebei suggest previously stark divisions between underground Catholics loyal to the Vatican and churches officially registered with the Chinese authorities have blurred in recent years.

The coming together reflects growing, if grudging, acceptance of government oversight by the faithful, as the Vatican pushes for a reconciliation with Beijing and many of the older generation that had expressed staunch opposition to the party are either silenced or dead.

Still, Cardinal Joseph Zen, 86, the outspoken former archbishop of Hong Kong, has led an international chorus of conservative critics who say the deal is a sellout to the Communist Party and an insult to those who had suffered under oppression.

He and other opponents of the secretive deal warn the expected gradual folding of unofficial churches into a government system of control risks abandoning a group of “loyalist” bishops and priests, who for decades resisted joining the Catholic Patriotic Association, as the state-backed church is known, and have been punished as a result.

China says there are six million Catholics in the country, across 98 officially approved dioceses. The Holy Spirit Study Centre, run by the diocese of Hong Kong, estimates that there are 10 million believers spread over 144 dioceses.

Such discrepancies have been the subject of closed-door negotiations for more than a decade between Beijing and the Vatican, which wants to preserve and expand the Catholic community in China.

The Vatican went ahead with the provisional deal, despite it failing to address some outstanding points of contention, because it feared the two Churches would split even further apart, resulting in a schism that would become irreparable, Vatican sources told Reuters

At four recent services attended by Reuters journalists, three official and one at an “underground” church, there was little that was discernibly different between those at churches loyal to Beijing or the Vatican.

Donglu is now run under the leadership of Bishop An Shuxin, who had been an “underground” coadjutor bishop alongside Su, meaning he had been granted right of succession by the Vatican.

An was also detained in the 1996 crackdown but reappeared a decade later, and in 2009 announced he had joined the Patriotic Association. In 2010, he became the officially recognized bishop of Baoding diocese, where Donglu is located.

An declined to be interviewed when contacted by Reuters, citing health problems.

For Diao, the village priest, An’s experience and that of the local Church in Donglu represents hope for an end to the divisions that have riven the church in China since Beijing in 1951 cut ties with the Vatican and banished its diplomatic mission.

“These divisions are made by people who want to say they have more faith than others,” Diao told Reuters during an interview in Donglu church, built in 1992 to replace the original shrine destroyed by Japanese bombers during World War Two.

“If people have faith, then they have faith. That doesn’t mean they shouldn’t also follow the law.”

The church remains one of China’s most important Catholic pilgrimage sites and thousands travel there every May to celebrate a claimed miraculous appearance of the Vigin Mary in 1900.

A depiction of Our Lady of China and the Baby Jesus, a painted image of a Chinese woman holding a baby, both dressed in the yellow imperial robes of the Qing dynasty, which ruled China until 1912, hangs in the church.

Since 2012, Chinese President Xi Jinping has overseen a tightening of restrictions on religious belief in China, with Muslims and Christians being targeted most.

Regular weekend classes and week-long summer camps for children at one church had been canceled by the authorities over the summer, one underground priest from a village near Hebei’s Zhangjiakou city said, declining to be named for fear of retribution from the authorities.

In light of the Vatican deal, he preached patience and acceptance of government restrictions: “I told my parishioners, this is not about the millions of us who already believe; it is about those who do not yet believe. We must have the foresight to think about how to let them find faith.”

The deal between Beijing and the Vatican was struck without resolution of some long-held Church concerns over clerics in detention, Catholic Church sources familiar with the substance of the deal have told Reuters.

As part of the deal, the Vatican approved seven excommunicated Patriotic Association bishops ordained without church approval, meaning all Beijing-approved Bishops have now been accepted by the Holy See.

It is unclear what, if any, immediate change the deal made for Beijing’s attitude toward China’s approximately 30 underground bishops, whose uncertain fate could still scupper the accord, said Yang Fenggang, a professor at Purdue University in the United States specializing in religion in China.

“This is a baby step and the relationship looks very fragile,” he said.

However, the acceptance of government-backed bishops by the Holy See had already started to blur the lines, as more bishops were seen as both Vatican and Beijing-approved, he added.

Wang Meixiu, an expert on China-Vatican relations at the state-affiliated Chinese Academy of Social Sciences, said for the agreement to move forward the pope will have to call for unofficial churches to “abandon former hatred” and be good citizens.

“The eyes of the government are still on those churches that have not registered and those underground clerics that have not been approved,” she said.