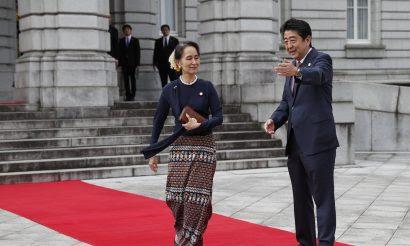 Dubbed the Mekong-Japan Summit, the meeting was the tenth to bring together national leaders from Thailand, Myanmar, Laos, Cambodia and Vietnam with Japan to discuss infrastructure projects.

It’s all part of Japan’s effort to regain lost momentum in the strategic region, where China has stolen a march in recent years with its rich checkbook diplomacy and generous infrastructure financing.

Tokyo’s reference to “quality” building also takes quiet aim at mounting criticism that China’s offerings often amount to “debt traps” that are structured to extract sovereignty-eroding terms and conditions when borrowers are unable to repay their debts.

Japan has a longer history of building roads, bridges and airports in the region than China. Partly due to its controversial history in the region dating back to World War II, Tokyo has taken a comparatively low key approach to its building, unlike Beijing’s bold and visionary BRI.

Since the early 2000’s, Japan’s infrastructure investment in Southeast Asia, including completed as well as ongoing ventures, amounted to about US$230 billion through year end 2017, according to the Singapore-based NMI Research. China’s total outlays for the region was US$155 billion over the same period, the same research shows.

Myanmar is one country that could benefit immensely from Japan’s renewed commitment to regional infrastructure development. The nation has seen a dramatic drop in foreign investment since its military drove hundreds of thousands of Rohingya Muslims into Bangladesh last year.

With the country facing possible sanctions for alleged crimes against humanity and genocide, Western investors are once again shunning the country. But Japan has always taken a more neutral approach to Myanmar’s internal problems and therefore is not perceived as antagonistic by the government or autonomous military.

China has provided a strong economic lifeline, with trade hitting US$10.8 billion in 2016-2017 and US$7.42 billion in the first eight months — April to November — of fiscal 2017-2018. Beijing is also pursuing various infrastructure projects with a vision of creating a trade-promoting “corridor” through Myanmar connecting its southern region to the Indian Ocean.

Myanmar’s heavy dependence on China was highlighted without mentioning it by name when Senior General Min Aung Hlaing, the commander-in-chief of the armed forces and its de facto ruler, spoke before cadets at the National Defense College in the capital Naypyitaw on October 8.

“Myanmar is an independent and sovereign nation…if a country accepts influence and interference of another country, the former will not be a sovereign country.” Last month, Myanmar announced it planned to scale back its China-backed Kyaukphyu deepwater port, initially projected at US$7.3 billion, to around US$1.3 billion, news agencies reported.

In Tokyo, Myanmar was represented by nominal leader Aung San Suu Kyi, who also had a separate bilateral meeting with Abe. The Japanese leader pledged continued support for what he termed “Myanmar’s democratization process, peace and national reconciliation process” while promising to contribute US$625 million for projects aimed at reducing traffic congestion in Yangon and improving drainage and sewerage systems.

It is still doubtful those ventures will be enough to significantly counter China’s near-dominance in certain Mekong countries, namely Cambodia and Laos, both of which are heavily dependent on Chinese loans and credits for their economic sustenance and infrastructure development.

China and Japan are running neck-and-neck in Thailand, however. While Beijing has pushed for the construction of a 873-kilometer high-speed rail connecting its southern Yunnan province with Thailand’s eastern seaboard and eventually onwards south to Malaysia and Singapore, the project has stalled under military rule.

A connecting rail line is being constructed through Laos, but without its connection to Thailand, China will not be able to link up with the rest of Southeast Asia and as far south as Singapore, a stated BRI goal for the region.

Japan, on the other hand, has bid to improve the quality of less strategically-sensitive, more domestic-oriented train lines in Thailand, including from the capital, Bangkok, to the northern city of Chiang Mai and south to the seaside resort town of Hua Hin.

Japan has never launched a single overarching mega-scheme for the region like China’s BRI, but has instead opted to sew together a number of simultaneous initiatives, of which the Mekong-Japan Summit is only one.

Another is the Japan-Mekong Connectivity Initiative, launched in 2016, which supports the development of a trade-promoting East-West Economic Corridor from the port of Danang in Vietnam through Laos and Thailand to Myanmar.

It is also financing a so-called “Southern Economic Corridor” that will run from Ho Chi Minh City in Vietnam through Cambodia and southern Laos to Thailand and finally the southeastern Myanmar port city of Dawei, where a new industrial zone is planned.

The strategic stakes for guiding the region’s infrastructure development and connectivity are high. And it remains to be seen if Japan’s “quality” projects will prevail over China’s massive scheme for trade-promoting infrastructure in Southeast Asia.

But it’s clear that Japan has begun to flex its financial muscles again in a power contest that will determine the future and shape of not only the five Mekong countries invited last week to Tokyo, but the entire Southeast Asian region.