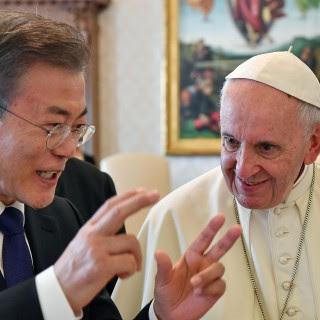 Pope Francis is ready to visit North Korea if its leader, Kim Jong-un, extends a formal invitation, South Korean President Moon Jae-in said on Thursday after meeting the pontiff, as the Vatican separately said a visit to Taiwan was not in the works.

Moon briefed the pontiff about his visit to Pyongyang in September when Kim had “expressed his wish to welcome the Pope into his country” saying he would “ardently” welcome him, the South Korean leader’s spokesman said.

“When President Moon asked the Pope if it would be all right for Kim to send an invitation … the Pope said: ‘What you just told me is enough, but it would be good if a formal invitation is sent’,” he said, speaking in Korean.

“If the invitation comes, I will definitely respond to that, and I can go,” he quoted the Pope as saying.

In a statement, the Vatican said: “Strong appreciation was expressed for the common commitment to fostering all useful initiatives to overcome the tensions that still exist in the Korean peninsula, in order to usher in a new season of peace and development.”

And Vatican spokesman Greg Burke said: “I can confirm that a verbal invitation was made.”

Moon’s spokesman also quoted the Pope as saying that he “strongly” backed the peace process, telling the South Korean leader to “march ahead without stopping,” adding: “Do not be afraid.”

In a separate statement, the Vatican said the Pope was not planning a trip to Taiwan.

Taiwanese Vice-President Chen Chien-jen made the invitation during a weekend audience with the Pope, later telling reporters that Francis had “smiled” when he made the offer.

Last month, the Vatican forged a landmark deal with Beijing on the appointment of bishops, paving the way for a rapprochement. The Vatican has not had diplomatic relations with Beijing since 1951.

That has raised questions over the future of official ties between Taiwan and the Holy See – the island’s only official ally in Europe – as China makes a concerted effort to poach its dwindling number of diplomatic allies.