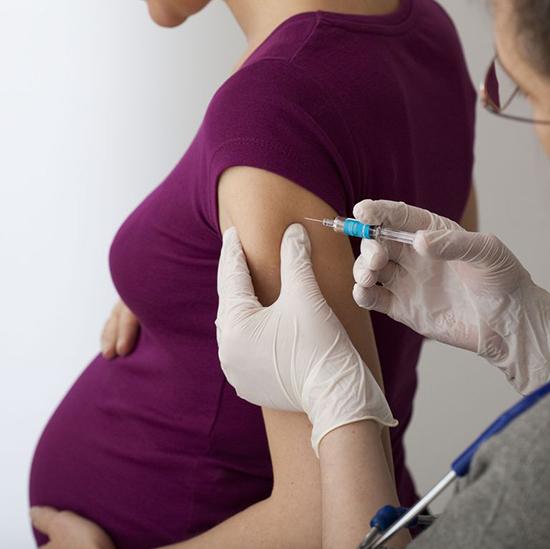 The Centers for Disease Control and Prevention (CDC) recommend that every single person six months and older get the influenza vaccine every single year (barring those who are allergic to the flu shot itself, of course).

But here’s the thing: What if you’re pregnant? Children under six months shouldn’t get a flu shot, per the CDC—so…is it safe for moms with babies growing in their uteri to get the prick?

Well, should I get the flu shot when I’m pregnant or not?

In fact, due to changes in the immune system, heart, and lungs during pregnancy, you might actually be at greater risk of complications from the flu (including hospitalization), so it’s a good idea to get vaccinated so you can avoid that risk.

Plus, by getting the flu vaccine, you also protect your baby as soon as it’s born, as the antibodies get passed in vitro (also important since babies themselves can’t get the shots), according to the CDC.

Wait, so it’s actually more important for pregnant moms to get a flu shot?

In a word, yes—and not just because it can keep moms from getting the flu (or at least lessen the symptoms if they do).

Fever is one of the most common symptoms of the flu—and in pregnant women, a high internal body temperature can lead to defects in an infant’s neural tubes (the structure from which the brain and spinal cord form, per the U.S. National Library of Medicine), which could harm the baby, per the CDC.

“It’s strongly recommended that women get the flu shot,” confirms Rachel Urrutia, M.D., assistant professor in the department of obstetrics and gynecology at the University of North Carolina at Chapel Hill. “The flu can be more severe for pregnant women, compared to other times in a woman’s life. Their immune system is less strong, and the airways involved in breathing are more swollen, so this can make the flu more serious,” she says.

Okay, but are there any extra precautions pregnant women should take?

Yep—the CDC, along with the American College of Obstetricians and Gynecologists (ACOG), suggests getting the actual flu shot, not the nasal spray.

“The nasal spray contains a live virus,” says Urrutia. “We don’t recommend any vaccines with a live virus for pregnant women,” she says. That’s not necessarily because the spray will cause the flu, but because pregnant women’s immune systems are already lowered, so the active virus could potentially cause a slight fever.

Keep in mind, however, that some people might still get a low-grade fever (below 100) and feel slightly tired or achey even after the shot, says Urrutia, and that’s normal. “Your body is creating an immune response to the vaccine,” she says. If your fever goes above 100, or you get other symptoms like chest pain or shortness of breath, then get a medical appointment, ASAP.

But from there, the precautions pregnant women should take are just like the precautions anyone else should heed—which means not getting the flu shot if you’re allergic to it or if you’re ill with a fever (just wait ’til you feel better in that case).

In addition to the shot, pregnant women should take the typical precautions for sidestepping the flu. That includes your regular germ-avoiding tactics, like washing your hands, covering your mouth and nose when coughing or sneezing, and staying away from other sick people, says Urrutia.

Be safe out there from October through May (that’s flu season, btw), pregnant ladies.