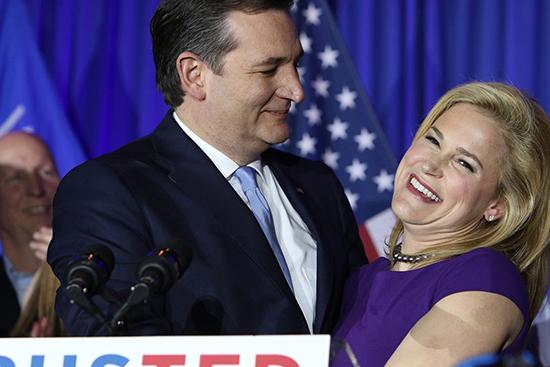 Though it was “love at first sight” (Heidi recalled that Ted, to her eye, looked like a “1950s movie star”), his choice of tune left her (understandably) puzzled. “They had a band, she told him—a violinist, no less! Why on earth would they play a CD?” The Atlantic’s Elaina Plott wrote. “‘Because no one can do Aladdin,’ he said.” (Tell that to the Broadway cast, Ted.) “[Heidi] relented, and it became a theme of sorts. Or that’s how she remembers it, anyway. On a magic carpet ride.”

Incidentally, this soft Aladdin theme has trailed the Cruzes as he became a Republican U.S. senator from Texas and 2016 Republican presidential hopeful. “A whole new world—that is what Ted Cruz wanted to give her,” Plott establishes from the opening line of the profile. “And I do appreciate that Ted started our life together with that song, because there’s some truth to it,” Heidi said. But she is also brutally honest about the pitfalls of political wifehood as a type A career woman with her own set of ambitions—as a managing director at Goldman Sachs in Houston, she notes that she is (and has long been) the chief family breadwinner and that she left a job she loved—working for Condoleezza Rice on the National Security Council—to relocate to Texas when Ted Cruz began pursuing state politics early in their marriage.

“He’ll be like, ‘It’s such a great life! We have so much adventure ahead! It’s like our magic-carpet ride,’” Heidi said. “And sometimes I’m like, ‘I hope we don’t hit the cement.’”

Brutal honesty, I tell you! While Ted may have envisioned a grand, magical odyssey—“soaring, tumbling, freewheeling through an endless diamond sky,” if you will—it was not always so for Heidi, especially at the beginning when she’d left Washington, D.C., for Houston and was long-distance married to Cruz, who was serving as solicitor general in Austin. “It was, like . . . ‘Why am I here? And by the way, I gave up living where my family is to come here, so that I could sit on [the] 290 freeway every week to go work for a company that’s actually headquartered in New York, and I could be in headquarters if I wasn’t here with you.’” These complicated feelings led, in part, Heidi said, to a 2005 incident in which she wandered on to an on-ramp, with a police officer later deeming her a “danger to herself.”

“We were early in our marriage . . . It’s a wonderful thing—like, in a great way, you amplify each other. You’re a couple now, you’re two together, stronger. But before that, you make all your own decisions,” Heidi said. “And there’s an adjustment that takes place when you realize that life is now all about the two of you, and that’s fine, but there are trade-offs. . . . I think it’s very natural to feel afraid, to feel like things are in your path, in your wake, that were not your decision. . . . I think my spirit just fell to a low place.”

After some soul-searching, including a Christian spiritual retreat, Heidi has eventually done the necessary mental gymnastics to live with Ted Cruz’s career and the demands it makes on her and hers—she saw taking unpaid leave from her job at Goldman to join him on the presidential campaign trail as fulfilling a purpose bigger than themselves, and she seems to relish in the way many people saw her as an asset to her husband’s presidential campaign—despite Donald Trump’s hideous jabs at her appearance. “Everyone loves Heidi,” a “prominent Houston Democrat” told The Atlantic. “Every time I talk to her I think, You should be running for office, not your husband.”

And, as a matter of fact, she’s not ruling it out, conjuring comparisons to another First Lady turned politician: Hillary Clinton. “Being at the Treasury Department was a dream for me, and I was just at the staff level,” Heidi said. “To do that at higher levels . . . I love that route, no doubt.”