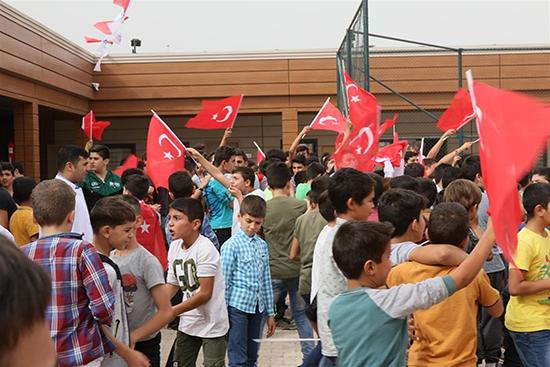 Turkey has managed the refugee influx “remarkably well,” the United Nations Population Fund’s representative in the country has said.

Turkey hosts 3.5 million Syrian refugees — more than any other country in the world — spending more than $32 billion from its own national resources to help and shelter refugeessince 2011, the beginning of the Syrian civil war.

Kulessa also talked about population dynamics in Turkey and the world, as well as the fund’s recent report on global fertility trends and reproductive rights, titled “The Power of Choice: Reproductive Rights and the Demographic Transition.”

In order to create an understanding about reproductive health and contraceptive choices for each person he said a “sustained and culturally sensitive approach” involving governments, community leaders and individuals themselves is required.

A day after the U.N. envoy for Syria announced his planned departure, the head of the humanitarian taskforce for the war-ravaged country said on Oct. 18 he would also resign next month.

“I am also leaving at the end of November,” Jan Egeland told reporters in Geneva.

His comment came after the UN envoy for Syria, Staffan de Mistura, announced on Oct. 17 that he will step down at the end of next month after more than four years in the key post.

The Italian-Swedish diplomat, who is the UN’s third Syria envoy in six years, said he was leaving for “purely personal reasons,” citing the need to give his family “a little bit of attention” after a long stint in the demanding post.

And Egeland insisted on Oct. 18 that he had already decided when his contract was renewed last month that he would leave at the end of November, and that it was “a coincidence” that he and de Mistura were stepping down at the same time.

“There are some places in southeastern Turkey where more Syrians are living than Turks,” Berger told a group of European journalists visiting Turkey’s southeastern province of Gaziantep, state-run Anadolu Agency reported.

“But Syrians have always been warmly welcomed and taken care of in the last seven years,” Berger added.

Turkey sets an example for hospitality to Syrians and Gaziantep practices this, he said.

The international community also supported Turkey to this end, including the EU and the U.N., but the main source of financial spending is provided by Turkey, the ambassador noted.

Syrians are also contributing to Turkey with their skills, Berger said.

Turkey hosts more Syrian refugees than any other country in the world. The country has spent more than $32 billion from its own national resources for helping and sheltering refugees since the beginning of the Syrian civil war.