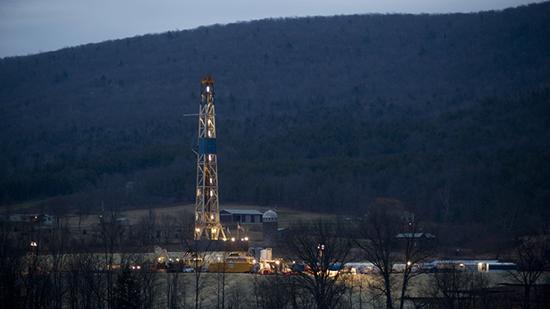 There are some early signs that the US shale industry is starting to show its age, with depletion rates on the rise.

A study from Wood Mackenzie found that some wells in the Permian Wolfcamp were suffering from decline rates at or above 15 percent after five years, much higher than the 5 to 10 percent originally anticipated. “If you were expecting a well to hit the normal 6 or 8 percent after five years, and you start seeing a 12 percent decline, this becomes more of a reserves issue than an economics issue,” said R.T. Dukes, a director at industry consultant Wood Mackenzie Ltd., according to Bloomberg. As a result, “you have to grow activity year over year, or it gets harder and harder to offset declines.”

Moreover, shale wells fizzle out much faster than major offshore oil fields, which is significant because the boom in shale drilling over the past few years means that there is more depletion in absolute terms than ever before. A slowdown in drilling will mean that depletion starts to become a serious problem.

A separate study from Goldman Sachs takes a deep look at whether or not the shale industry is starting to see the effects of age. The investment bank says the average life span for “the most transformative areas of global oil supply” is between 7 and 15 years.

Examples of these rapid growth periods include the USSR in the 1960s-1970s, Mexico and the North Sea in the late 1970s-1980s, Venezuela’s heavy oil production in the 1990s, Brazil in the early 2000s, and US shale and Canada’s oil sands in the 2010s. Each had their period in the limelight, but ultimately many of them plateaued and entered an extended period of decline, though some suffering steeper declines than others.

US shale is entering the lower end of this range at about 7 years. While shale is still growing, there are some signs that the “Shale Tail,” which Goldman says is “the phase when shale becomes a less meaningful driver of global oil supply,” may not be that far off.

Goldman lays out the five signals to watch out for, which would indicate that the glory days of shale are over. Although Goldman says the real trouble may be a few years off, there is some evidence that some of those dynamics are beginning to occur. The investment bank offers a breakdown as follows:

The investment bank says that shale-focused companies are still a solid bet through the early 2020s, and it singles out companies like Concho Resources or Pioneer Natural Resources, two large Permian drillers. But by 2025, shale E&Ps will begin to see their stars fade.

At that point, Goldman warns investors to pivot out of shale pure-play companies and focus either on diversified companies that have assets outside of shale, or on the integrated oil majors. “[W]e believe future resource additions outside shale deemed low on the cost curve will likely be positively received by investors,” Goldman stated, citing Hess Corp. as a company that might fit this description because of the huge oil fields it is developing with ExxonMobil in offshore Guyana.

Put another way, depletion will become “a greater theme” in the future, so companies that are sitting on assets that deplete quickly will fall out of favor. Those that can stave off declines will fare much better.

The investment bank still expects US shale to add around 1 million barrels per day each year through 2021 at least. But with early signs of strain, limits on productivity and steeper decline rates, it is clear that the industry’s glory days are numbered.