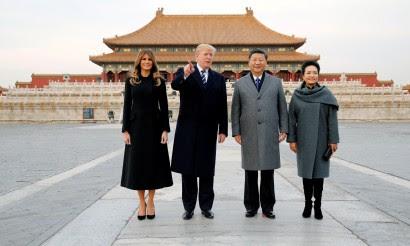 China’s purchase of more than $1 trillion of US Treasuries is a double-edged sword; if Beijing sells out the move could harm them badly, but with Trump seeking a weaker dollar, Asia’s Treasury hoarders need a way to reduce their dollar habit

Few scenarios would seem to dramatize the spirit of this witticism more than China’s vast holdings of US Treasuries – $1.165 trillion of them. This epic dollar hoard, it’s widely believed, gives Xi Jinping’s government powerful leverage over Donald Trump’s.

President Xi does, of course. All it would take is for China to skip a few Treasury auctions and, boom, bond market chaos gets Trump’s undivided attention. In that sense, Trump Treasury Secretary Steven Mnuchin could be excused for fretting over news that Beijing cut its dollar-bond holdings for a third straight month in August.

Yet two can play at this leverage game. Isn’t Xi’s Communist Party really the bigger dupe in the world’s biggest pyramid scheme?

The value of all that state money increasingly depends on the top buyer, China, continuing to buy more. If China stopped, and the pyramid stopped winning fresh cash to support older purchases, things come crashing down. China is, in other words, more trapped than Xi’s party might want to admit.

It’s an intriguing window through which to view the will-Xi-or-won’t-Xi dump Treasuries to ruin Trump’s presidency. The reason Xi isn’t even making idle threats in this regard is that he can’t.

One worry: having to explain the loss of hundreds of billions of dollars of state wealth to party bigwigs. Sure, Xi is the most powerful mainland leader in decades. But few actions might do more to mar his legitimacy.

Another: how the resulting rise in US yields would boomerang back China’s way, and fast. Borrowing costs for American consumers would skyrocket, leaving less demand for made-in-China goods. Talk about a pyrrhic victory, if there is any victory to claim.

That said, Xi’s China and Trump’s other bankers in Asia have new urgency to break their dollar addiction. Beijing, Tokyo, Taipei, Singapore, New Delhi and Seoul all rank among the top-16 holders of US debt that Trump is sure to do his worst with.

Trump’s bizarre brawl with his hand-chosen Federal Reserve chairman hardly instills confidence. Since taking the monetary reins in February, Jerome Powell has continued a modest tightening cycle on which the Fed embarked in 2015. Trump now calls Powell “crazy.” Top Trump economic advisor Larry Kudlow says the Powell Fed is “having a bit of a revolution.”

That’s bunk. With unemployment at 3.7%, growth north of 4% and Wall Street going gangbusters, the Fed may be behind the tightening curve, not going rogue.

Trump is, though. On top of irresponsible fiscal policies and meddling in monetary matters, Trump is gearing up for an assault on the dollar. In his 21 months in White House, Trump has given Rodrigo Duterte in the Philippines competition in the wrecking government institutions department. He’s gone after the judiciary, the legislature, the courts, the press and the Fed. So why not the dollar?

In January, Mnuchin signaled an end to Washington’s 23-year strong currency imperative. More recently, Trump has complained the dollar’s brawn “puts us at a disadvantage.” Trump is now demanding currency-manipulation bans from trading partners, including Japan. That’s Trump-speak for “we want a weaker dollar.”

So how does Beijing get out of this dollar birdcage? It’s no wonder the People’s Bank of China is working furiously to increase the yuan’s use in global trade. That includes getting it named a top-5 currency by the International Monetary Fund.

Xi might want to work with other top Asian US Treasury hoarders. Why not set up a multi-government working group to devise ways to reduce Asia’s dollar habit? Possibilities include swap arrangements, a giant Asian monetary fund and cobbling together a mechanism to draw down dollar holdings in ways that don’t crash markets.

It won’t be easy. It doesn’t require a vivid imagination to wonder how Trump’s Twitter feed might react. But with many trillions of dollars of Asian savings at stake, this is a necessary and pragmatic enterprise. With some fresh thinking and bold action, Asia can escape the dollar trap once and for all.