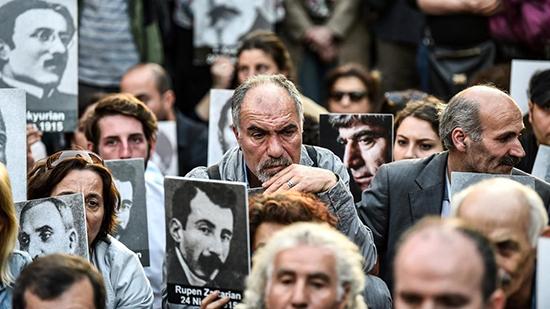 Eastern Anatolia was the home of Armenians for centuries before Ottoman Turks penetrated and overran the mountain plateau in the 16th century.

The survival of the Armenian way of life under the Ottomans is often cited as evidence of the relative liberality of their regime; the Armenians themselves are erased from such apologetics for Ottoman imperialism. In reality, Armenians – an overwhelming majority of them peasants – endured tremendous hardships after becoming subjects of foreign rulers.

The Ottoman Empire was as brutal as – and in many instances infinitely more brutal than – any imperialism that ever emanated from Europe. If Armenians survived – and some among them flourished in Istanbul – it is because of their own pluck and tenacity, and not the kindness or enlightened governance of their overlords.

Armenians’ successes did not, however, insure them against violence: they were viewed with suspicion, as foreign agents in their own land, and hundreds of thousands were massacred between 1894 and 1908. The Young Turks who rose to power in the early 20th century were worse still. Having decided to join the Central Powers, they conveniently pinned the blame for their total rout at Russia’s hands on Turkey’s Armenians, triggering what has been called the century’s first genocide – comprising ethnic cleansing, deportation, and murder – in which more than a million Armenians were killed.

Turkey annexed Armenian lands, but it could not extinguish Armenian life. There may be two million Armenians in Turkey today – citizens of a state that, having sought to annihilate them, refuses even to acknowledge the crime. Hadjian, a journalist of Armenian descent who was born in Syria and grew up in Argentina, first heard about the “secret Armenians” living in the Anatolian mountains as a boy in the 1980s. In 2011, he made his journey to Turkey to discover them. Nothing – no corner, no village, no people –

seems to have escaped his eye. Every custom, nuance of language and nationalist longing is captured in this lively book of reportage.

Hadjian’s sympathetic portraits of people who, unlike him, have been compelled to shed their Armenian identity is deeply moving. “With pain upon pain, tear upon tear, our elders became Muslim,” a man in Hemsin tells him. “They butchered Armenians because they were Armenian, so why would we say we are Armenian?” he asks Hadjian.

This is an existential dilemma for even those citizens of Turkey who self-identify as Armenian. What is their place in Turkey?

How can they be full citizens of a state that exalts the imperium that uprooted their ancestors from their own lands?

Turkish President Recep Tayyip Erdogan has encouraged Turkey to see itself simultaneously as a victim of Europe and as a modern avatar of the Ottoman Empire. His insistent reminders of Turkey’s past greatness intensify the resentments bred among his supporters by the perceived condescension of Europe to today’s Turkey. The result of this combined use of inferiority and superiority to electrify the masses is a concerning ethno-religious nationalism frozen in a seemingly permanent state of self-pity.

Erdogan’s critics say that he contemptuously stamps on international law, persecutes Turkey’s Kurdish minority, casually threatens Arab states who don’t genuflect to him and tirelessly vilifies the European Union – all the while claiming that Turkey is the wronged party.

This book demonstrates why other nations should not indulge Turkey by refusing to examine the events of 1915-1916 for what they were. Until then, Secret Nation is likely to be the final word on this subject.