President Recep Tayyip Erdoğan has vowed continued efforts to expand rights andfreedoms and to improve democracy in the country amid Turkey’s efforts to mend ties with the European Union and European countries.

“We will continue to work on expanding rights and freedoms, as well as improving democracy, although some people have made a habit of distorting the reality,” Erdoğan said at an opening ceremony for the Turkey Youth Foundation (TÜGVA) headquarters in Istanbul on Oct. 21.

Under his leadership over the last 16 years, the AKP government has never intervened with people’s lifestyles and has not narrowed the freedoms of any ethnic or religious group, Erdoğan said. “Those who are disturbed by Turkey’s last 16 years are the ones who have lost their privileged status,” he said.

Erdoğan’s remarks came as Turkey has recently engaged in a new diplomatic campaign to mend ties with the EU by pledging new promises in regards to boosting democracy. Turkeyhad convened the Reform Action Group last month after a three-year break and signaled its readiness to revive stalled accession talks. The EU, however, wants to see concrete actions in the fields of freedom of expression and rule of law along with political statements.

“Terror organizations and their supporters are also the ones who have lost their grounds in the last 16 years,” he said, stressing that Turkey was on the eve of a new era. 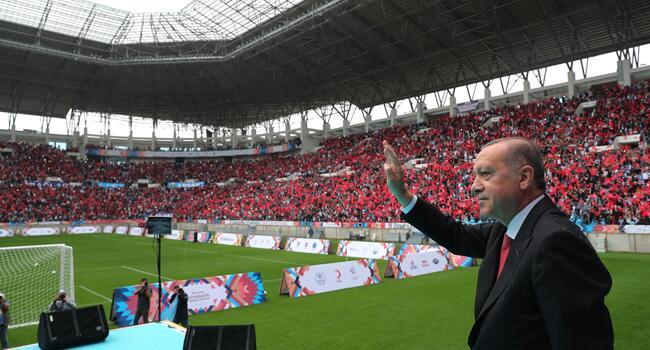 “The name of this era is the Era of Resurrection. It is when the idea of a great Turkey will again be put in practice. This is of course also related with our geography but it is never about expansionism,” Erdoğan said.

Turkey’s main objective is to defend a global system where all the oppressed and sufferers will live in comfort, peace and safety in the world, the president said, highlighting this as Turkey’s main principle with regard to the ongoing turmoil in Syria as well.

“Look at what the head of the main opposition said in the United Kingdom yesterday [Oct. 20]. ‘We will send all Syrians back to their country when we come to power.’ Does this person have anything related to humanity? Only an inhumane person would say this,” he said.

In an address to the Oxford Union over the weekend, Republican People’s Party (CHP) leader Kemal Kılıçdaroğlu called on all countries to cooperate in bringing peace to Syria.

“Syria and its roads, bridges, schools, hospitals, need to be reconstructed. All this must be done and the EU has to lend support to this end. Only after that we will send Syrians back to their home. We are not going to send them in the middle of a war but to a country where they can live humanly. Developed countries and Turkey have a responsibility for the reconstruction of Syria. We have embraced and sheltered four million Syrians who had not been accepted by any European nation,” Kılıçdaroğlu said.