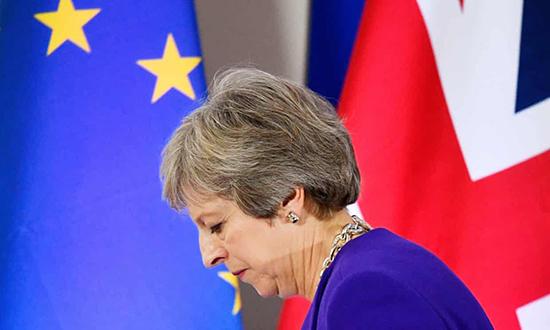 Theresa May will tell the Commons on Monday that 95% of the Brexit withdrawal agreement and its protocols are settled as she seeks to demonstrate to anxious MPs in her own party that she is making headway in the increasingly fraught divorce talks.

The prime minister is expected to confirm she has resolved with the EU the future status of Gibraltar, developed a protocol around the UK’s military base in Cyprus and agreed a mechanism for resolving any future disputes with the EU.

Taking the unusual step of briefing planned remarks to the Commons in advance, May will conclude that “taking all of this together, 95% of the withdrawal agreement and its protocols are now settled” in talks that she has until now largely insisted on keeping secret.

The prime minister is scheduled to make a statement on Monday afternoon, after intense criticism from the Tory right for appearing to have made no progress other than indicating at last week’s European summit that she was open to extending the post-Brexit transition period, prompting renewed speculation about a leadership challenge.

A clearly rattled Downing Street held two conference calls with cabinet ministers over the weekend to update them on the European summit before a cabinet discussion on Brexit on Tuesday. Concerns were raised about the transition period and time-limiting the Irish backstop. “No one is in the mood to be bounced,” said one cabinet source.

May intends to show the progress made by highlighting all the specific areas of agreement already reached, including settling the divorce bill at £39bn, having an implementation period until at least the end of 2020 and recognising the rights of EU citizens living in the UK and vice versa.

The withdrawal agreement covers the legal agreement or treaty that the UK will sign with the EU to conclude its exit by 29 March, the end of the article 50 period. May will say that the shape of the deal across “the vast majority” of its text is now clear.

Restive Conservative backbenchers will meet on Wednesday night at a meeting of the 1922 Committee, which will be addressed by the party chair, Brandon Lewis. A total of 48 of them have to write to the committee’s chair, Graham Brady, to demand a confidence vote in May if they are to trigger a leadership challenge that No 10 is desperate to avoid as the Brexit talks come towards their final critical stage.

Two key issues remain unresolved in the Brexit talks: how to ensure that the so-called backstop designed to avoid a hard border in Ireland has an end point and that it does not allow for Northern Ireland to be separated from Great Britain via a customs border.

Last week, May indicated she could accept extending the transition period in which the UK would remain subject to the customs union and single market beyond December 2020 in an attempt to reach a free trade agreement that would prevent the backstop being used.

Earlier on Sunday, the Brexit secretary, Dominic Raab, conceded that Conservative backbenchers had become jittery about the Brexit negotiations but insisted “now is the time to play for the team” as speculation about May’s leadership swirled.

“We need to hold our nerve; the end is in sight in terms of a good deal – the prize that we want: a good deal with the EU,” Raab said.

Officials from both sides will continue talks this week in the hope of a breakthrough after last week’s summit where EU leaders agreed they would try to find a way to strike a deal with May.

When asked if May was hanging by a thread, Raab said it was a pretty strong thread and that there were reports every week that nearly 48 Tory MPs had written to Brady demanding a vote of no confidence.

Underlining the difficulties that May faces with her own party, it emerged on Sunday that 41 MPs have now indicated they would not sign up to a Brexit deal if it was based on her Chequers trade proposals, enough to block any final deal being approved without opposition support.

Trudy Harrison, the MP for Copeland, was the latest to sign up to the Stand Up 4 Brexit campaign that opposes any future trade deal based on Chequers, which would sign up the UK to a common rulebook for food and goods after Brexit to ensure a free flow of trade across the border in Ireland.

The former Brexit secretary, David Davis, touted by some as a successor to May, wrote in the Mail on Sunday that “even the most charitable verdict on last week’s Brexit talks in Brussels can hardly describe them as a success”, because May appeared to endorse extending the transition period beyond December 2020.

Critics of May used aggressive language in anonymous briefings at the weekend. One told the Sunday Times that the prime minister had entered “the killing zone” this week, while another told the Mail on Sunday that she should “bring her own noose” if she went to the 1922 Committee meeting.

Nicola Sturgeon, the SNP leader, said: “Language like this debases politics. Get a grip, Tories.”

Sir Keir Starmer, the shadow Brexit secretary, said there was a real lack of confidence that May could bring back “anything by way of a good deal” because the government was so divided. He said Tory infighting seemed “to have gone to another level”.

There are 315 Conservative MPs. Under party rules May needs to win the support of just over half – 158 – to win a vote of no confidence, but many believe that she may not be able to continue as prime minister if more than 100 MPs were to vote against her.