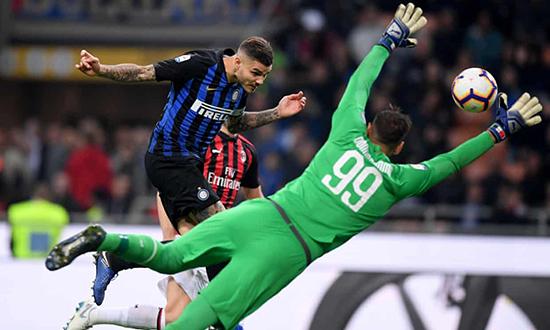 A little roundup from today’s games in Serie A:

The Nerazzurri had to wait until the second minute of stoppage time to break the deadlock but Icardi’s close-range finish from Matias Vecino’s cross extended Inter’s winning league run to five games.

Lazio also left it late but picked up their seventh win in nine league games with a 2-0 victory at Parma. Ciro Immobile broke the deadlock with an 81st-minute penalty after Valon Berisha went down in the box, and Joaquin Correa sealed the three points in added time.

Chievo remain rock bottom as Josip Ilicic inspired Atalanta to a 5-1 victory with a hat-trick at Stadio Marc’Antonio Bentegodi.

Daniel Ciofani’s double failed to inspire Frosinone to a much-needed victory as they were held to a 3-3 draw at home to Empoli.

Bologna and Torino drew 2-2 with Arturo Calabresi completing the Rossoblu’s comeback. Torino had taken a two-goal lead inside 54 minutes thanks to efforts from Iago Falque and Daniele Baselli. Federico Santander brought Bologna back into the contest just before the hour mark and Calabresi rescued a point by smashing home with 13 minutes remaining.

Fiorentina were also forced to settle for a point after Leonardo Pavoletti cancelled out Jordan Veretout’s penalty to earn Cagliari a 1-1 draw.