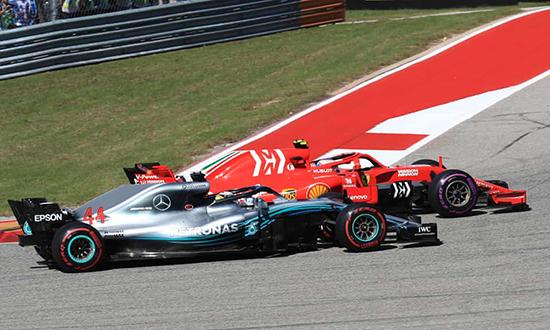 Having crushed any challenge from Ferrari in the second half of the season, Lewis Hamilton might have been expected to complete a simple denouement to secure his fifth title at the US Grand Prix.

The fight we were denied for the title, however – which will still surely be decided in Hamilton’s favour at the next round in Mexico – was at least rescued by a thrilling, dramatic race in Austin, racing that would be welcomed at any round, championship decider or not.

Hamilton has been explicit of late that he does not believe the title will simply come to him and, although frustrated at being unable to do enough on Sunday to finish it, the bigger picture, as it has all season, remained Hamilton’s focus.

In the build-up to the meeting both Hamilton and his Mercedes team had been extraordinarily circumspect in denying any suggestion that the British driver’s fifth title was all but won and their caution proved appropriate.

Every indication was that Hamilton would close it out at the Circuit of the Americas. He is in devastating form but with Mercedes opting for a two-stop and Sebastian Vettel able to recover from his spin on the first lap, Kimi Räikkönen’s hugely celebrated win means Ferrari have managed to cling to the British driver’s coat tails and have postponed the inevitable for another week. It was a superb, bravura performance from Räikkönen, reminiscent of the Finn at his best, rightly congratulated by Hamilton.

Hamilton and his team wanted to close it out in Texas but they were outplayed by Ferrari on strategy, Räikkönen’s track position in holding up Hamilton proved crucial and, despite the British driver’s late charge, he could do nothing. The title will surely come – seventh in Mexico will clinch it – but he had rightly been circumspect in cleanly ceding the lead to Räikkönen’s fast start. He has correctly played the percentages all season and, while there will be disappointment at not finishing it here, it is these decisions that have ensured the title is all but his.

Hamilton and Mercedes were under no pressure and perhaps called their race accordingly. They looked to take advantage of pitting under the virtual safety car but eventually became stuck behind Räikkönen, who held him up and put his rubber under the cosh and it proved decisive. The Finn is experienced and, despite having no part in the championship, played his role in the drama to perfection.

The Mercedes pre-race caution then proved to be a staunch preparation for what ultimately ensued in Texas that has, briefly, denied Hamilton his fifth title. He will yet equal the great Juan Manuel Fangio, after a season during which he had admitted to being under pressure as never before when Ferrari and Vettel had brought a new intensity to the championship battle. After failing to trouble Hamilton of late his rivals at least proved in Austin they still have teeth.

Vettel’s slim hopes of making the title fight last to another race looked to have disappeared after a three‑place grid penalty imposed due to failing to slow sufficiently under red flags during the first practice session, compounded by his spin on lap one. In a season in which his misjudgments have proved very costly, it looked to be the final nail in the coffin. He came back strongly however, with a pacey, controlled charge he will need to replicate next season if he is to challenge again.

That he did manage to come back is credit to the German and Ferrari who had Räikkönen’s tactics down perfectly and managed Vettel’s recovery well. The Scuderia’s recent errors were put behind them in Austin but they already know too well the moments where the title has been lost. Repeated mistakes had left them floundering and almost powerless to stop Hamilton by the time they came to the United States. The writing remains on the wall but writ larger than ever now.

Hamilton had arrived in Texas as champion elect, Mercedes believe they did not quite have the pace they needed in Austin and overworked their tyres. That such a nail-biting finale did not go their way might have been avoided had Hamilton dictated the race from the front.

The fight looked to have gone out of Vettel and Ferrari after the last round at Suzuka but they proved in Austin they can still mount at least a challenge even if they are already looking to what they must do next year.

Hamilton, like all the great champions, did everything that was asked of him here. Maintaining the professional mindset of taking nothing for granted going into the meeting had been the correct approach. Waiting another week to be crowned may seem like an age but it will come because he and Mercedes have already done the hard work.