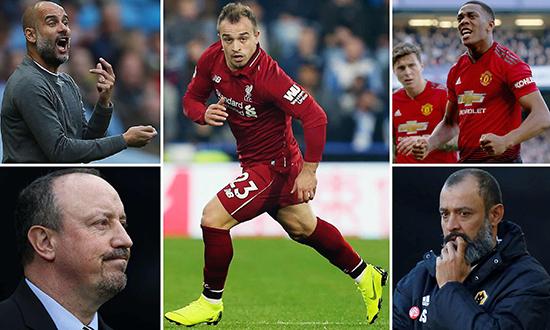 On the eve of the new season Slavisa Jokanovic said Fulham “don’t have to change much but we need to be intelligent. We need to grow up.” Two months down the line and either Jokanovic underestimated how much Fulham needed to adapt to be ready for the Premier League or his players are not being as smart as he had hoped. Whatever the answer, Fulham did not spend more than £100m in the summer to be languishing in the relegation zone with one win from nine games and a defensive record that is in danger of becoming an embarrassment. Alarm bells should be ringing after Cardiff, who had scored only four times in their opening eight games, doubled their tally for the season against Jokanovic’s porous team. As things stand, Fulham are on course to concede more than 100 goals this season. They need to wise up fast. Stuart James

2) Mourinho and Martial can learn from each other

The nature of football, society – and José Mourinho – means that Mourinho is often viewed through a Fisher-Price prism that offers neither nuance nor context, and as such anyone deemed to oppose him is rhapsodised as hero, genius and martyr. Anthony Martial has benefited from this inclination, but the reality is less basic. Mourinho probably should be more nurturing, definitely should not drop him after every bad half, and absolutely put Alexis Sánchez in front of him when he was flying. But Martial probably could toughen up, definitely should run in behind, and must take possession on the move. But perhaps the two have finally reached an understanding; if each can learn from the other, it will elevate both. Daniel Harris

Newcastle are enduring their worst run of form since 1898, lack a win this season and have collected only two points. Almost any manager but Rafael Benítez would have been sacked by now but, privately, even an owner as brass-necked as Mike Ashley surely appreciates that his lack of proper summer investment has returned to bite him, painfully, on the bottom. The irony is that on another day a Brighton side managed by the much‑loved former Newcastle head coach Chris Hughton might well have lost. Newcastle had 27 shots on goal and 68% of the possession but, as Benítez knows, luck really is a big factor in football. “We have to be more clinical,” he said. “And Brighton did well. They managed the game, they wasted time.” Hats off to Hughton as Benítez faces possibly the biggest challenge of his illustrious career. Louise Taylor

4) Divorce on the cards for Morata and Chelsea?

Álvaro Morata was yet again ineffective for Chelsea at the weekend and, if there was a moment that summed up his general contribution for the club, it came, somewhat ironically, in the move that led to the opening goal. Eden Hazard picked up the ball in the right channel of Manchester United’s area, looked across the line for somebody to pass to and saw nobody there. Morata was behind Hazard and the situation called on him to drive forward. Instead the Spaniard stood where he was, passive and flat-footed, and watched as the Belgian’s cross was cleared for the corner that Antonio Rüdiger subsequently converted. Morata has three goals in 12 games for Chelsea this season with Saturday’s fixture the eighth in the league in which he has been substituted. That is simply not good enough for a £58m centre-forward and Maurizio Sarri may now be wondering if January would be the best time for him and the club to cut their losses. Sachin Nakrani

Brendan Rodgers once said managing a football team is like building an airplane while it is flying. Many of the Celtic manager’s maxims are easy to mock but that is a pretty good line and plenty of Premier League managers, who often are not allowed time to take a moment to breathe and think, would probably agree. Mark Hughes had some of that time over the international break and seemingly used it well, the work done with a surprise central-defensive selection of Wesley Hoedt and Jack Stephens paying off in Southampton’s best performance of the season against Bournemouth. “Probably the selection of the back four was a little bit of a surprise to some of you guys but it was a reflection of the work that was done,” Hughes said. Despite Manolo Gabbiadini’s glaring miss, the point gained and the way the Saints stymied their hitherto rampant opponents will provide plenty of encouragement. Nick Miller

Compared with last season’s start of no points and no goals after seven games Crystal Palace are in relative good health with seven points on the board from nine matches. Their performance at Everton should have increased that tally and, but for Jordan Pickford’s fine penalty save from Luka Milivojevic, they would have had a platform to frustrate Marco Silva’s designs on a third straight Premier League win. But their weakness in front of goal presents a major obstacle to Roy Hodgson’s plans to turn promise into progress. Only Huddersfield have scored fewer goals in the Premier League this season and a test of Palace’s patience and confidence lies ahead with Arsenal, Chelsea, Tottenham and Manchester United to play in the next four games. “My mindset will be to continue doing what we are doing,” Hodgson said. “In the last few games we have not been staring down the barrel of the gun in terms of the opponents scoring but we can do more ourselves.” Andy Hunter

Xherdan Shaqiri, in his first 90-minute display for Liverpool in the Premier League on Saturday, brought welcome creativity to the team’s midfield without shirking defensive duties. He was given a deeper role than the one he is accustomed to but he was “absolutely OK” according to Jürgen Klopp. “It’s an interesting position,” said the player himself. “I don’t play it often but maybe I have more of the ball there.” He is, then, a useful option for Wednesday’s Champions League game against Red Star Belgrade – for more than one reason. After being fined by Fifa for a double-headed eagle celebration after scoring against Serbia for Switzerland during the World Cup, the Kosovo-born player says Wednesday’s fixture carries no extra significance for him beyond the three points. “Maybe there are going to be some people who will whistle at me but I treat every game the same,” he says. “It’s just a football game. Sport is not politics.” Paul Doyle

Manchester City have now kept five league clean sheets in a row. Admittedly the last was against an outclassed Burnley but the one before that was at Anfield and Pep Guardiola is pleased at the way his defence has tightened up. “We are not giving away any goals, we are not even giving away chances,” the City manager said. “Burnley had no attempts on target, at Liverpool they had maybe one. We have been solid.” Greater tests will arrive in the next couple of weeks but City can also take heart from the fact that their five goals came from five different scorers. “We have more attacking options now,” Guardiola said. He can say that again. Kevin De Bruyne made his comeback in this match, Raheem Sterling was an unused substitute and Riyad Mahrez is going to take some shifting after a wonderful goal capped his most convincing performance since leaving Leicester. Paul Wilson

How will West Ham be feeling now the dust has settled on their defeat by Tottenham? Almost certainly they will feel positive, and with some measure of just cause. Tactically, Manuel Pellegrini’s team were well set up and in the first half had success with their ploy of quickly springing the ball inside Spurs’ full-backs. That approach was ultimately scuppered by the untimely injury to Andriy Yarmolenko but, while the home side lost some of their attacking edge, they stayed solid throughout (not always something that could be said of them in recent years). Issa Diop gave Harry Kane no quarter and once again Declan Rice cruised through the game at the base of midfield. Add Marko Arnautovic, who just gets better and better and deserved a goal, and West Ham have a spine that – if it stays fit – gives rational grounds for ongoing optimism. Paul MacInnes

10) Nuno must assess his options

“It’s a good question,” admitted Nuno Espírito Santo. The Wolves manager had just been asked whether the surprise defeat by Watford would encourage him to shuffle his pack for their trip to Brighton on Saturday, having previously opted to field the same starting XI for all nine Premier League matches so far. But while there is certainly no need for him to panic yet, the under-par first-half display at Molineux that saw Wolves concede two goals inside a minute would have been concerning for the former goalkeeper. The 3-4-3 formation that has served them so well relies on João Moutinho and Rúben Neves dominating central midfield but they were overpowered by the physicality of Abdoulaye Doucouré and Étienne Capoue on Saturday. If his side is going to maintain its excellent start to life in the top flight, Nuno may need to find a plan B for when the tide is against them. Ed Aarons