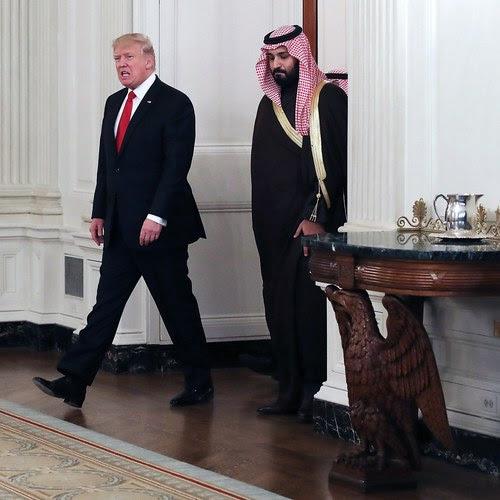 By Susan B. Glasser- The New Yorker

On Monday afternoon, I received an e-mail that was short and to the point. “Please be advised that the reception for the National Day of the Kingdom of Saudi Arabia on Thursday, October 18, from 6:00 to 8:00 pm has been cancelled,” it read. It was signed by Fatimah Baeshen, a spokesperson for the Saudi Embassy. No explanation for the cancellation was given, but, of course, none was needed: this was no time for the Saudis to throw a party for themselves, amid the furor over the disappearance and apparent gruesome murder of the dissident Saudi journalist Jamal Khashoggi.

The basic facts have not changed much since Khashoggi, a Washington Post editorial columnist living in self-imposed exile in Virginia, entered the Saudi consulate in Istanbul, on October 2nd, never to reëmerge. But the story, fed by a stream of leaks from Turkish officials with ever more grisly details of what they say was Khashoggi’s capture, killing, and dismemberment by a team of fifteen Saudis, has turned into an international crisis, fuelled by the Saudis’ implausible denials and by President Trump himself. Until Thursday, well into the third week since Khashoggi’s disappearance, Trump never even admitted the obvious fact of Khashoggi’s likely death, and he continues to act more like the Saudis’ lawyer in the court of world opinion than the aggrieved defender of human rights and free speech that an American President is supposed to be at such a moment. The belated announcement, late Friday evening, by the Saudis that Khashoggi was dead, and their new claim that he died in a scuffle with Saudi agents, will hardly quell the controversy. Nor will Trump’s near-instant pronouncement that the Saudi excuse was credible. Instead, thanks to Trump and his ardent embrace of Saudi Arabia’s brutal young crown prince, Mohammed bin Salman, it’s about much more than the murder of a single man.

In an era when Trump’s tweets and constant commentary produce news cycles of shorter and shorter duration, the Khashoggi affair may turn out to be the longest-running Washington plotline of this midterm-election season. The Times’ revelation that Trump was a decades-long tax cheat came and went. The September plea deal by Trump’s former campaign chairman Paul Manafort receded from the headlines. The national uproar over allegations of sexual misconduct by the Supreme Court nominee Brett Kavanaugh lasted just under three weeks. Yet here we are, a full seventeen days and counting as I write this, with no end in sight as the Trump Administration blusters and blunders about in a search, so far unsuccessful, for a way to end the saga that does not involve a serious rupture with an ally central to its entire Mideast strategy.

I’m not surprised by Washington’s obsession with the story: it’s the Trump Presidency distilled to its morally compromising, press-bashing, truth-denying essence. At a time when many question American leadership in the world, Trump’s combination of credulity and cynicism in response to the brutal murder of a dissident who sought refuge here gives the world’s bad guys yet another reason to cheer. Even many Republicans in Congress are furious at Trump, with the senators Lindsey Graham and Marco Rubio reëmerging as the tribunes of American virtue that they used to be, demanding Trump take tough action against the Saudis in response. Chris Murphy, the Democratic senator from Connecticut, told me that this particular outrage, in a world full of them, has resonated because “it’s a spy thriller, a page-turner.” He believes that dynamic will continue. Of the Saudis, he said, “Every day that goes by they don’t try to explain what happened is another day their credibility starts to evaporate in Congress.”

Already, it’s clear on Capitol Hill that American politics toward Saudi Arabia have shifted dramatically. In May of Trump’s first year in office, when I talked with Murphy about his efforts to get Congress to sanction Saudi Arabia over its brutal war in neighboring Yemen, Murphy’s was a lonely fight. Now it’s a bipartisan consensus. “I’m mad and frustrated that it took the murder of one journalist for people to start paying attention to the murder of thousands of civilians inside Yemen, but still I see this as a belated turning point in our relationship with Saudi Arabia,” Murphy told me on Thursday. “I don’t put it outside the realm of possibility that the Saudis pull a rabbit out of a hat, but right now I don’t see how Congress continues to approve arms sales or maintain its unconditional approval for the war in Yemen.” If the Democrats take control of one or both houses of Congress next month, Murphy and others I spoke with expect more fallout, including investigations of Trump’s business interests with the Saudis (the President falsely claimed to have none at all, in one of the week’s more brazen tweets) and the extensive dealings between Trump’s son-in-law, Jared Kushner, and the Saudi prince known as M.B.S., with whom Kushner has so famously bonded.

As the days have extended into weeks with no Saudi explanation forthcoming and Trump’s own party breaking with him, the collateral damage in Washington is starting to accumulate. Lobbying firms and think tanks on the Saudi dole have been pressured into dropping the Kingdom as a client, including the Democratic-leaning firm the Glover Park Group and the G.O.P. firm Barbour, Griffith & Rogers, which gave up a nearly million-dollar-a-year account after one of its founders, the Republican lobbyist Ed Rogers, was told by the Washington Post’s editorial-page editor, Fred Hiatt, to choose between his columns in Khashoggi’s newspaper or his firm’s paycheck from the Saudi government. The last time there was such an anti-Saudi backlash here was in 2001, when fifteen of the nineteen hijackers on 9/11 were revealed to be Saudi nationals.

I spoke with one of the many lobbyists who have been caught up in the Khashoggi affair now that it has become a classic Washington moment, in which a money gusher deemed acceptable by the Beltway’s élite suddenly becomes politically untenable. The lobbyist blamed M.B.S. for not being what Washington wanted him to be. “We can’t all go and live in this guy’s lie. No way. It’s just too vivid and too morbid,” the lobbyist told me. “This isn’t one for everybody to get on board. It’s not going to work that way.” But he was also furious with Trump for exacerbating the scandal and turning it, once again, into a story about Trump himself. “Trump never handles anything right,” the lobbyist, a Republican, said. “Never. Never.”

Public scorn, meanwhile, has also been directed at those who shared the Trump Administration’s high regard for the crown prince and hailed him as a modernizing young reformer. The Times columnist Tom Friedman has taken endless grief for his column “Saudi Arabia’s Arab Spring, at Last,” from November, 2017, which was filled with encomiums for M.B.S., and long lists of pro-Saudi commentary by Washington’s Mideast hands have been widely circulated. Dennis Ross, the veteran Middle East diplomat who served Presidents of both parties, from George H. W. Bush to Barack Obama, is one of them. Like Friedman, Ross is no Trump apologist, but he wrote effusively about M.B.S.’s reforms, seeing them as a hopeful sign of Western-style moderation, not the centralizing impulse of the rising autocrat M.B.S. has turned out to be. “America should get behind Saudi Arabia’s revolutionary crown prince,” Ross wrote in the Post in February, in an article that has earned him loads of hate tweets this week. (His words, one commenter declared, “should live in infamy.”)

Video From The New Yorker

Ross told me that the latest controversy was a reminder of the uncomfortable truth about America’s decades-old alliance with Saudi Arabia: “The relationship with Saudi Arabia has always been based on interests, not values.” Ross said that he still sees M.B.S. as a religious modernizer whose country is a key partner for the United States, but that Trump has postponed an inevitable rebuke by failing to take a tougher line. “This cannot pass without a consequence, not only because of the Saudis but because everybody’s watching,” Ross told me. “You have to have norms, you have to have consequences, you have to show there are behaviors that really can’t be tolerated so this doesn’t become the new normal.”

But that argument, of course, is exactly why Trump has Washington worked up in a rare bipartisan lather. There may be accountability, at least for a moment, for the city’s pundits and influence peddlers. But, once again, the President himself seems insistent on brazening his way out of uncomfortable facts. It is a script we’ve seen Trump follow before: defending the Russian President, Vladimir Putin; praising the Chinese strongman Xi Jinping; falling “in love” with the North Korean dictator Kim Jong Un.

All three of them, as the former Air Force general and National Security Agency chief Michael Hayden told the Times this week, have carried out extrajudicial attacks on foreign soil during the Trump Presidency. Many of Trump’s supporters say that the President’s words don’t matter, that his defense of tyrants is mere hyperbole. But I think back to an incident with Putin back in the early two-thousands, when American diplomats criticized the Russian President for the brutality of his war in Chechnya. Asked by a reporter about the criticism, Putin dismissed their complaints as unimportant. He hadn’t heard from his friend George W. Bush, Putin told the reporter, so it didn’t matter.

Trump’s response to the Khashoggi affair represents “the Putinization of world order,” as Vance Serchuk, the foreign-policy adviser to the former C.I.A. director David Petraeus, put it to the Post’s Josh Rogin. It is the predictable outcome of a President who not only dismisses human rights but actually encourages others to flout them. Trump chose to make Saudi Arabia the first foreign trip of his Presidency, instead of Mexico or Canada, where our leaders traditionally go. He has lavished praise on tyrants while getting into a public feud with the liberal Canadian Prime Minister, Justin Trudeau. Does it matter that Trump calls journalists “enemies of the people,” that even in the midst of this uproar he cheered on a Republican politician who physically attacked a journalist? Yes, it does. Saudi Arabia’s assault on Jamal Khashoggi will not only be remembered as the isolated killing of a lone dissident by a tyrannical Middle Eastern monarchy. Because of Donald Trump and his weeks of equivocations, it will be remembered as an embarrassing stain on America’s record, too. Trump, cornered, may well pivot next to censure and finger-wagging, although for now he still seems to be a willing participant in what many believe to be a Saudi coverup. But the damage has been done, and the world is well aware of what America’s President really thinks.

This post has been updated to include Saudi Arabia’s announcement on Friday evening and the White House’s response.