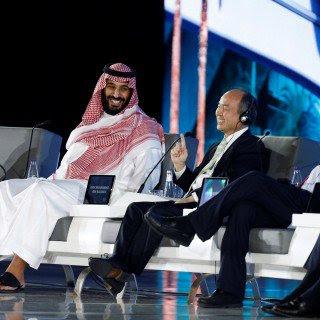 One of the first rules of investing is never to put every egg in one basket, especially one whose designs for the future conflict with yours

For a chief executive famed for divining the super trends of tomorrow, SoftBank’s Masayoshi Son can sure miss the bigger plot at times.

Japan’s richest man changed the global venture capital game investing like a roulette punter. Some big bets here, some there; hoping at least one will pay off.

It all dates back to 2000, when he put US$20 million on Jack Ma, who would go on to create Alibaba, netting Son US$50 billion by 2014. These days, Son swings for the fences, hoping his luck lives on.

Trouble is, the US$100 billion Vision Fund strategy Son uses to harness disrupters is largely made in Riyadh. A disproportionate amount of the fund’s cash comes from a government now a small step from total pariah status.

This, however, is not Son’s only Saudi problem. The other paradox is the gap between what Son seeks to achieve and his benefactors’ comfort zone. Arguably, Son’s biggest passion is a carbon-free world. He has invested tens of billions of dollars in solar fields in Japan and pledged to put hundreds of billions to work building such fields from India to Southeast Asia.

Yet the purse strings of all this are held by a government whose wealth, geopolitical clout and domestic legitimacy rely on the very commodity the Vision Fund seeks to render extinct.

Elon Musk has flirted with the Saudis, too. In August, the Tesla billionaire got in trouble when he said he’d take the company private and had secured the financing.

When regulators called, Musk hit up the Saudis for cash. While that did not work out, Musk’s Saudi ties are at odds with his drive to hasten the demise of fossil fuels via electric vehicles. Talk about cognitive dissonance.

And what of Son’s tantalising conflict of interest? Yes, Saudi royals talk about their desire to diversify the economy away from oil. Over time, though, what if the government Mohammed bin Salman is directing changes its mind? What if it opts for restoring the primacy of fossil fuels? Suddenly, the petrodollars driving Son’s ambitions dry up.

The chilling effect on US start-ups is another wild card. And how President Trump’s White House or the US Congress might respond.

“Silicon Valley is watching closely for signs that Saudi Arabia’s alleged connection to the suspected killing of a critical journalist may hurt the ability of the kingdom and Saudi-connected investors to gain access to the best US tech start-ups and talent,” says analyst Paul Triolo of Eurasia Group.

Also uncertain is the geopolitical fallout on an already panicky global economy.

“The bottom line is that the combination of a rising oil price and the shunning and shaming of Saudi Arabia is not by-and-large a bullish combination,” said Louis Gave of Gavekal Research. “And it is especially bearish for the formerly highflying, but low cash-flow generating tech names which until now seemed to have found a backstop in the shape of easy-come-easy-go (and now easily gone) Saudi money.”

What Son forgot, though, is one of the first rules of value investing: do not put your financing eggs in one basket; especially not one whose designs on the future conflict with your own.

William Pesek is a Tokyo-based journalist and author. He has written for Bloomberg and Barron’s