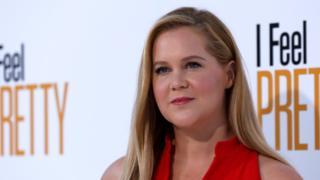 US comedian Amy Schumer has announced she is pregnant with her first child – on a friend’s Instagram account.

Schumer first hinted at the news with a picture of her husband Chris Fischer and herself edited onto an image of Prince Harry and his wife Meghan.

Fans were then linked to the profile of journalist Jessica Yellin, who posted Schumer’s recommendations for the upcoming US midterm elections.

The list ended with the words: “I’m pregnant – Amy Schumer”.

The royal couple had shared their own baby news last week while on tour in Australia.

Schumer, who is a bestselling author and wrote and starred in the 2015 film Trainwreck, is politically outspoken and was arrested during a protest against Judge Brett Kavanaugh’s nomination to the Supreme Court earlier this month.

As part of her announcement, she endorsed more than 20 Democratic candidates standing for Congress in November’s polls.