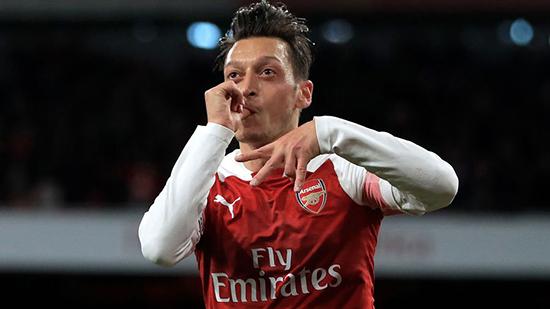 A sublime display from captain Mesut Ozil inspired Arsenal as they came from behind to beat Leicester and extend their winning run to 10 games.

After a shaky start from the Gunners, Leicester took the lead through a Hector Bellerin own goal but Ozil – back in the side following a back spasm – turned home an equaliser on the stroke of half-time.

He was then heavily involved in two goals for substitute Pierre-Emerick Aubameyang – who had also netted twice off the bench at Fulham last time out – with Arsenal eventually running out 3-1 winners at the Emirates Stadium.

While head coach Unai Emery will be slightly concerned by the pedestrian nature of Arsenal’s opening 40 minutes, the Spaniard will be pleased to toast a seven-match Premier League winning streak which has taken his side to within two points of the top.

While Arsenal were flat-footed from the off, the visitors started particularly brightly with Kelechi Iheanacho twice threatening in the opening exchanges.

Rob Holding, so impressive in the Arsenal defence in recent games, was struggling to to contain the Nigeria international and was cautioned for pulling him back on the halfway line.

Leicester were incensed from the resulting free-kick as referee Chris Kavanagh missed the ball clearly hit Holding on the hand as he cleared away from in front of Wilfried Ndidi.

Bernd Leno made a superb stop to keep out Harry Maguire’s header as Claude Puel’s side continued to dominate, before Jamie Vardy came within inches of heading in Ricardo Pereira’s cross.

The constant pressure soon paid off as Leicester took the lead, albeit in fortuitous circumstances, as Ndidi fed Ben Chilwell and his pass deflected in off Bellerin, wrong-footing Leno in the process.

Granit Xhaka’s free-kick was then tipped over by Leicester skipper Kasper Schmeichel as Arsenal looked to respond immediately.

The visitors were unable to hold out until the interval as Arsenal’s head of steam saw them draw level courtesy of Ozil, who steered Bellerin’s low cross past Schmeichel with aplomb in the last minute of the half.

The hosts were visibly lifted by their leveller as the second half commenced, Henrikh Mkhitaryan spurning a decent chance after smart work from Alexandre Lacazette.

Leicester came within inches of retaking the lead as Leno charged off his line but got nowhere near James Maddison’s corner, which Ndini thundered against the crossbar.

Emery looked to change things around by introducing both Matteo Guendouzi and Aubameyang from the bench with an hour gone as Lichtsteiner and Mkhitaryan made way.

It took the Gabon striker less than two minutes to make the difference, sweeping home from close-range after Ozil’s perfect pass allowed Bellerin to send in a low cross.

Ozil was again heavily involved as Arsenal scored their third of the night soon after, Aubameyang tucking home from in front of goal after a delicious pass from the German.

Reminiscent of Aaron Ramsey’s superb team goal at Fulham, Lucas Torreira, Guendouzi, Bellerin and Lacazette were all involved as the Foxes were swept aside for Aubameyang to tap in.

Lacazette missed two fine chances to increase the margin of victory as Ozil departed to a standing ovation, with Arsenal seeing out the remaining minutes to take their winning streak into double figures ahead of Thursday’s Europa League clash with Sporting Lisbon.