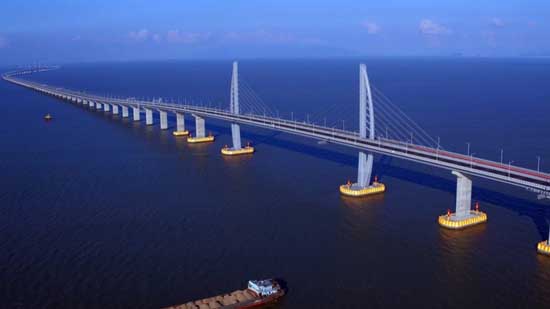 A $20 billion sea-crossing bridge, connecting mainland China to Hong Kong and Macau has officially opened on Tuesday. The six-lane bridge has been constructed in just nine years.

The 55-kilometer long bridge (34 miles) will cut travel time from Hong Kong to Zhuhai (in China’s southern Guangdong province) from three hours to 30 minutes. It is a key element of Beijing’s plan for a Greater Bay Area covering 56,500 square kilometers across southern China. The long-awaited bridge will encompass 11 cities that are home to a combined 68 million people.

The Hong Kong-Zhuhai-Macao Bridge was built to withstand magnitude 8 earthquakes, a super typhoon and strikes by super-sized cargo vessels. It incorporates 400,000 tons of steel which is 4.5 times more than in San Francisco’s Golden Gate Bridge.

The bridge includes a 6.7-kilometer submerged tunnel to help it avoid the busy shipping paths over the Pearl River Delta. The tunnel runs between two artificial islands, each measuring 100,000 square meters.

Although the bridge is opening to traffic this week, private cars will need a special permit to be allowed to drive on the bridge. Most drivers will have to park at the Hong Kong port, switching to shuttle bus or special hire cars. A single trip on shuttle buses will cost $8-$10, depending on the time of day.