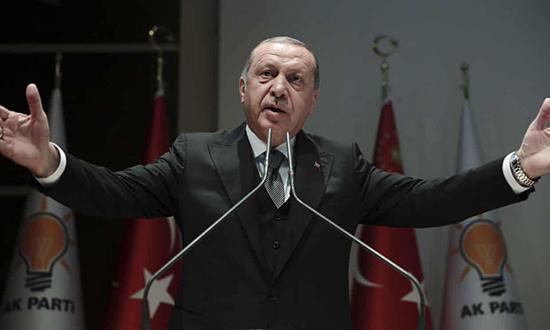 After weeks of leaks by Turkish police implying that the Saudi crown prince, Mohammed bin Salman, must have known of a premeditated murder, there was no last-minute sign that the Turkish president would hold back from revealing what he has described as the “naked truth” about Khashoggi’s death. On Monday an aide vowed: “Nothing will remain secret.”

Erdoğan’s statement to members of his AK party coincides with the opening by the crown prince himself of an investment conference in Riyadh. Aides say Erdoğan will address Saudi Arabia’s belated admission that Khashoggi died inside the Saudi consulate, where he was last seen on 2 October.

The crown prince has denied any knowledge of the killing, and his foreign minister, Adel al-Jubeir, has said the operation was a terrible mistake carried out by a rogue group.

The White House has been making frantic private efforts to reduce the fallout from Saudi Arabia’s disastrous mishandling of the Khashoggi case, urging Erdoğan not to rub the crown prince’s face in the dirt.

On Monday, Donald Trump told reporters “I am not satisfied with what I’ve heard” about the case, and later the president told USA Today he believed the death was “a plot gone awry”. However, that evening the US treasury secretary, Steven Mnuchin, met the crown prince for talks in Riyadh, where they stressed “the importance of the Saudi-US strategic partnership”. Reuters reported on Monday that CIA director Gina Haspel would travel to Istanbul to “work on the investigation”.

The Turkish drip-drip of leaks has already forced Saudi Arabia to make an unprecedented admission of guilt, leading to the sacking of two of the crown prince’s closest aides as well as 18 other Saudi officers.

In the latest leak, CCTV footage emerged on Monday that appears to show a Saudi agent leaving the country’s consulate in Istanbul wearing Khashoggi’s clothes. CNN aired the footage, citing a Turkish official who identified the man as Mustafa al-Madani, a “body double” and member of a 15-man Saudi team sent to Istanbul to target Khashoggi.

Erdoğan also has the chance in his speech to reveal details of an audio recording that purportedly exists of the moments of Khashoggi’s death and dismemberment.

Reports on Monday suggested Saud al-Qahtani, an influential adviser to crown prince Mohammed bin Salman, participated in a Skype call to the room in the consulate where Khashoggi was held.

A Turkish intelligence source told Reuters that at one point Qahtani told his men to dispose of Khashoggi. “Bring me the head of the dog,” he said.

If true, the allegations would confirm reporting in the Guardian on Sunday that Turkey had intercepted the hit squad’s communications. It is understood that Erdoğan has not shared the recording with the US.

Erdoğan’s spokesman Ömer Çelik vowed Turkey would continue until the end to enlighten the world of the “nefarious murder” of Khashoggi, who was a prominent critic of the crown prince.

He said the killing “was planned in an extremely savage manner”. It was the first official indication that Ankara believes a murder plot was coordinated in advance. “We are faced with a situation where there has been a lot of effort to whitewash this,” he said.

Despite rapid progress in the Turkish police investigation, it would be a surprise if Erdoğan can report on Tuesday on the two main outstanding issues in the investigation – the location of Khashoggi’s body and whether evidence exists showing the crown prince ordered the killing or had prior knowledge.

Turkish opposition figures had initially thought that Erdoğan would exploit Saudi’s embarrassment by bargaining for favours from Washington and Riyadh in exchange for choosing not to publish hard evidence.

But it is possible that the president instead sees the episode as a chance to engineer a recasting of the political dynamic across the Middle East, chiefly by weakening the crown prince’s authority.

Erdoğan’s aides have made no secret that they believe the young prince has destabilised the region, pointing to the 16-month Saudi-led boycott of Qatar as a prime example.

The UK foreign secretary, Jeremy Hunt, told MPs the Saudi claims that Khashoggi died in a fight “did not amount to a credible explanation”, as he warned that the British response to the murder would in part turn on his confidence that Riyadh has learned it must change.

Hunt said the Turkish-led investigation had to reveal the location of body; why Riyadh had been silent for so long; who authorised the dispatch of 15 officials to Turkey from Saudi Arabia; why Riyadh took 17 days to disclose the death; and why Turkish investigators were barred from the Saudi consulate.

Speaking in London, Qatar’s foreign policy spokeswoman, Lolwah R M Al-Khater, described the Khashoggi killing as “a wake-up call for the entire region”. She said she had faith in the Turkish justice system.

Jared Kushner, Donald Trump’s son-in-law, who struck up a friendship with Bin Salman, said he had told the crown prince to be transparent over Khashoggi’s murder.

“Right now we are more in the fact-finding phase,” he told a conference organised by CNN. “We are getting facts from multiple places. The secretary of state is working with the national security team and we will determine what we want to believe, what is credible and what is not credible.”

Asked what advice he had given to the crown prince, he said: “To be fully transparent. The world is watching.”