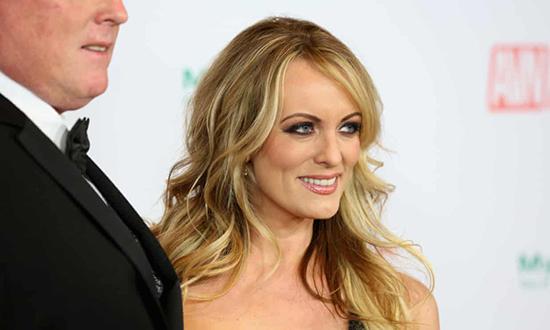 Daniels’s book reveals her to be a defiant survivor, with an eye for scabrous detail

“OK,” says the all-knowing Stormy Daniels halfway through her book, “so did you just skip to this chapter?” Yes, I did: she is well aware of a male tendency to climax prematurely. The chapter I read out of sequence chronicles her evening with Donald Trump after a California golf tournament in 2006 – three hours listening to his self-puffery, then a scant two minutes enduring “the least impressive sex I’ve ever had”.

Afterwards, Trump lavished praise on his own performance; Stormy shrugged “yeah”, meaning “whatever”, and fled. Quite apart from his clumsy kissing, his feeble attempt to talk dirty, his lack of finesse when astride her and the mess he made on her stomach by not rubbering up, he didn’t even provide the dinner he’d promised when he invited her.

Emetic as it all is to remember, Stormy knows that she has a responsibility to history. “The world is waiting to hear about his penis,” she says and obliges in emasculating detail. For the record, it’s smallish and Trump had to “fumble” it into her – not a compliment to its hydraulics. It looks repellently fungoid, with a head that she first likens to a mushroom and then – determined to spare him no humiliation – to a toadstool. She can’t report on his balls, which in her opinion “he needs to shave”; they skulked in a tangled thicket of “yeti pubes”. A transplant might be in order, since Stormy reports that “his hair down there was better than what was on his head”.

Even deadlier is her account of Trump’s simpering demeanour. Rather than playing the virile seducer, he behaved as if it was his role to be seductive. He received her in his hotel suite wearing black silk pyjamas and slippers. “Go put some fucking clothes on,” Stormy ordered. He meekly complied, after which she demanded that he bend over to be spanked. “It was a power moment,” she gloats; his “peacock plumage” wilted and she amused herself by plucking further feathers from his vainglorious tail. After an eternity of tedious chitchat, she made the mistake of going to the bathroom. When she returned, she found Trump perched on the bed in his undies, “like he had tried out different poses” in “a poor attempt at looking powerful”.

She’s done her duty by belittling Trump’s tackle, making him look like a loser

Trump is as good as gelded by her description: no wonder he’s so terrified of sharks, since Stormy rears up like Jaws to menace his mushroom with her jagged incisors. The creepiest moment comes when, in a “grossly vulnerable voice”, he pleads to see her again. That exactly catches the whiny tone you hear behind his bilious rants – a needy craving for validation, adulation and immunity from prosecution.

Before and after this encounter, Stormy’s book reveals what a defiant, unsinkable woman she is, brought up in squalor by a mother who calls her a “cunt” and says: “I wish I’d aborted you”, terrorised by a stepfather who shot holes through the walls, raped in childhood by a neighbour, consoled mainly by the horses she adored. As a teenager, she stripped in a “titty bar” housed in a trailer. Graduating to porn, she rapidly advanced from performing to writing and directing her own features. She has no shame about her work, though with live-in men she prudishly insists on separate bathrooms. She is pleased that she never heard her long-term lover fart or burp, “so outside of sex, our bodily functions were mysterious”. As she says: “I’m a fucking lady, thank you” – and you’d better not speak disrespectfully of what she calls her “ladyparts”.

Stormy boasts that she has “grown balls”. Given her “alpha-dogging” of Trump and her jokes about his furry sporran, who knows whether this is more than a metaphor? She sees herself as an elemental force, as she proclaimed when she changed her name. She was christened Stephanie, but realised “I couldn’t rule the world with a name like that”. After becoming Stormy, she extended the meteorological conceit by nicknaming her surgically augmented breasts Thunder and Lightning.

Her invented surname came from the label of a Jack Daniel’s whisky bottle and it transformed a person into a brand. The code name used by her bodyguards is even more telling, because its source is a myth: the goons call her Daenerys, the mother of dragons in Game of Thrones. Capable of unleashing tempests or attacks by a menagerie of scaly monsters, Stormy belongs in the same pantheon as the goddess Kali, whose neckwear was a string of human skulls; she has taken at least one scalp, which has an orange comb-over.

If all this sounds as overblown as Stormy’s triple-D mammaries, then that’s because she is on a cosmic mission. After she fingered Trump, fans urged her to save the world; recently, she reports, they’ve “upgraded my job to saving the universe”. Like Wonder Woman, she accepts the challenge, though we shouldn’t expect an apocalyptic showdown, with Thunder and Lightning discharging fire and fury. Stormy has already done her bit by belittling Trump’s tackle and making him look, to use his own most hurtful word, like a loser. When he bragged about his epochal achievements in a speech to the UN in late September, the visiting heads of state immediately began to titter. Autocrats may survive protest marches and impeachment proceedings, but they have no defence against ridicule.