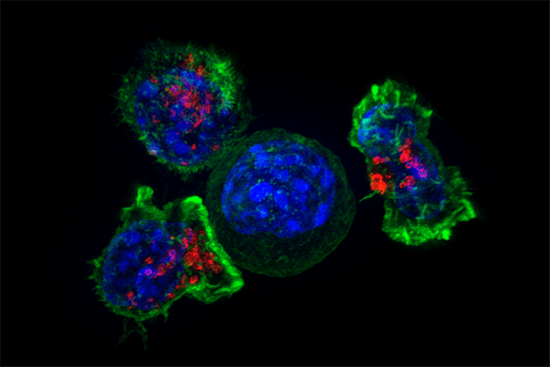 A recent clinical trial could change the face of therapy for a very aggressive and stubborn form of breast cancer: triple-negative. A combination of chemotherapy and immunotherapy boosts survival rates, the scientists found.

Triple-negative breast cancer is so called since its cells lack receptors for two hormones (estrogen and progesterone) and one protein (HER2).

While this cancer is uncommon, it is one of the most aggressive and deadly.

In the majority of cases, it quickly becomes resistant to chemotherapy and continues to spread through the body.

According to existing research, triple-negative breast cancer makes up about 10–15 percent of diagnosed breast cancers. This form of cancer is also more likely to affect younger women in their 40s or 50s.

Recently, immunotherapy — a type of treatment that boosts’ the body’s defenses against disease — has been gaining ground as a potent cancer therapy.

Now, for the first time ever, a clinical trial has demonstrated that immunotherapy, when delivered alongside chemotherapy, can boost survival and halt tumor growth in people with triple-negative breast cancer.

Researchers at Queen Mary University of London and St Bartholomew’s Hospital, both in London, United Kingdom, conducted the trial.

Its success is reported in the New England Journal of Medicine and was also outlined at the European Society for Medical Oncology 2018 Congress, held in Munich, Germany.

Researchers report that they are working on a new treatment for metastatic breast cancer.

“It is particularly tragic that those affected are often young, with many themselves having young families,” he continues.

“I’m thrilled that by using a combination of immunotherapy and chemotherapy we are able to significantly extend lives compared to the standard treatment of chemotherapy alone,” he continues.

Survival extended by up to 10 months

The team tested the effectiveness of a combined immunotherapy and chemotherapy treatment for triple-negative breast cancer. More specifically, they used Atezolizumab, a monoclonal antibody (immunotherapy drug), and the chemotherapeutic agent Nab-paclitaxel.

According to the normal guidelines, the scientists gave the participants Nab-paclitaxel on a weekly basis. To this, however, they added an Atezolizumab dose once every other week.

They discovered that this powerful combination is able to extend a person’s survival by up to 10 months, reducing their risk of death or disease progression by up to 40 percent.

“These results are a massive step forward,” notes Prof. Schmid. The trial’s success, he believes, will be a game changer when it comes to treating aggressive forms of breast cancer.

“We are changing,” he goes on to say, “how triple-negative breast cancer is treated in proving for the first time that immune therapy has a substantial survival benefit.”

“In a combined treatment approach, we are using chemotherapy to tear away the tumour’s ‘immune-protective cloak’ to expose it as well as enabling people’s own immune system to get at it.”

Following the trial, the relevant authorities in the United Kingdom are currently reviewing a new treatment, which may soon become available in their National Health Service (NHS).

Until the treatment option becomes available at a national level, the scientists are offering it to individuals with triple-negative breast cancer within the frame of ongoing clinical trials at St Bartholomew’s Hospital.