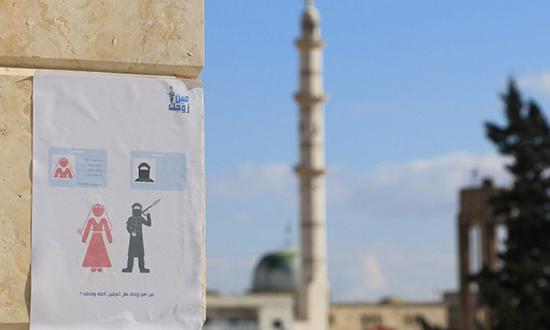 Children born to Syrian mothers and foreign fighters killed in battle are living without a nationality, without an education and without a future

Syria’s opposition-held province of Idlib has been temporarily shielded from a government offensive, with key stakeholders Turkey and Russia set to meet with European parties October 27.

But on the ground, the fate of thousands of children born to Syrian mothers and foreign fighters slain in battle has never been more precarious.

Over the course of seven years of war, many Syrian families in Idlib resorted to marrying their under-age daughters to foreign fighters – many of them Asian – in part for the stability of the salaries paid by Jabhat Fatah al-Sham, formerly Al-Qaeda, and the houses the group confiscated from the original owners and offered to its fighters.

This phenomenon has had catastrophic ramifications on families. After the foreign father dies or flees the country, the child remains with no registered parents. The mother often does not know the real name of her dead husband, as foreign fighters use their battle names even on marriage certificates, according to testimonies collected by Asia Times.

Maha al-Yousef, a 20-year-old Syrian women from Idlib’s countryside, was married to “Abu Mujahed,” a foreign fighter who arrived in Al-Janoudiya village in western Idlib in 2014. She was 16 at the time.

“I didn’t know my husband and hadn’t seen him before the marriage. I only remember getting married because of family pressures,” she recalled. “My mother died in 2000 and my father was killed in a shelling attack on our village in 2013.

“My brother forced me to marry Abu Mujahed, who has Uzbek roots. I went along with it and we were living under one roof by September 2014.”

Since its start, the Syrian conflict attracted foreign fighters who wanted to join the jihadist groups that formed there. Some joined the Al-Qaeda affiliate Jabhat al-Nusra, which later became Jabhat Fatah al-Sham, and others the Islamic State group.

As of last year, there were more than 40,000 foreign fighters from 110 nationalities in Syria and Iraq, according to a report published by the Soufan Center in October 2017.

Abu Mujahed usually came home 10 days per month, but sometimes was away for longer, according to Yousef. Her new husband only knew a few worlds of Arabic, but the young woman says she was relatively happy with him because he treated her well and provided for the needs of the house.

She only knew him as “Abu Mujahed” and did not know much about him other than that he was from Uzbekistan.

In mid 2015, Yousef had a son with her husband who they named “Mujahid.” Less than one year later, in 2016, she received news that her husband had been killed in a battle between opposition factions and the Syrian army in Turkmen mountain in the Latakia countryside. That was when a journey of suffering started.

“I fled my village after my husband died and the fighting intensified. I headed to the camps in Idlib’s northern countryside, but my fear is growing every day,” she said. “Mujahed doesn’t go out of our tent because he looks different from the other kids – he looks Asian.

“The biggest problem that I’m facing now is that the Syrian community rejects the families of foreign fighters, and many of the people in the camp accuse my husband of joining the Islamic State group. My son is rejected and doesn’t have friends.

“As for me, I have no family records, no marriage certificate. My son is three and has no ID. I’m scared of the future. I think we will have a hard one.”

“I have no family records, no marriage certificate. My son is three and has no ID. I’m scared of the future. I think we will have a hard one.”

Yousef survives on the aid the camp receives from humanitarian organizations and has not been able to obtain documentation for her marriage, which was not registered at a civilian court but only documented in an Islamic contract drafted by the village’s sheikh.

“I’m in a very difficult situation. I lost most of my family members in shelling that targeted my village in 2017, including my brother, his wife and his two children,” she said. “I only hope to obtain documents for my son so that he can go to school like other kids, and be registered in civil records.

“I honestly don’t know what my fate will be. I’m trying to find work, anything to ensure a good life for me and my son. He’s still too young and I can’t leave him alone anywhere. I’ve been in this camp for about a year and a half. This is the state of many women who have lost their husbands and don’t have a provider any more.”

As the issue of undocumented children grew, activists in Idlib launched an awareness campaign called “Who is your husband?” The campaign attempts, through banners and graffiti, to deter women from marrying foreign fighters who do not give their identity.

Sanaa, a 24-year-old Syrian woman, married Abu Yousef Al-Mohajer, a Jabhat Fatah al-Sham fighter, about six years ago. Her husband is from Uzbekistan and she was forced into the marriage because of her family’s financial struggles, but she didn’t expect to end up with an undocumented child.

She told Asia Times: “I married Abu Yousef when I was 18. At first I didn’t want to get married, but after a short while, I loved my husband a lot. Asian men respect women and treat them well, better than any Syrian man I know.

“He spoke fluent Arabic, and I was very happy with him. I loved him so much that I wished I had been born in Uzbekistan too.”

One year ago, Sanaa’s husband left for a battle against the Syrian army in Latakia countryside. She has not heard from him since. Not knowing whether he was alive or dead, she left their home in the countryside six months ago to move back in with her family in Idlib.

“The only thing I know about my husband is that he told me he comes from a somewhat prosperous family in Uzbekistan. He always told me that he misses his family and that we will one day live in Uzbekistan together when things calm down,” she said. “After Abu Yousef disappeared, I found myself with two undocumented children: a four-year-old boy and a two-year-old girl.

“My father was killed in a car bombing in the city four months ago, so I had to work in a sewing workshop to provide for myself and my family.”

Sanaa became her family’s sole provider, and the only documentation she has for her children is a paper from the hospital with the father’s name missing.

“I’m suffering from the disappearance of my husband. The children need their father and our financial situation is very bad. I work for 10 thousand Syrian lira (US$20) a week, which doesn’t cover our needs with the inflation in the city,” she said.

“I don’t have any document proving my marriage, I lost my marriage certificate during our many moves because of my husband’s work as a fighter.”

Mohamed, a lawyer who lives in Idlib and requested to be identified only by his first name, said: “There are a lot of cases of marriages that were not documented in civil courts. They are illegal marriages because the husband’s real name is not mentioned.

“We are now facing a humanitarian catastrophe of children with unknown fathers. We have tried through seminars and communication with Islamic courts to flag this danger, but to no avail, as there’s little responsiveness.

“The problem that we will face in the near future is that the children of foreign fighters will not be able to obtain IDs and they will have very hard lives.”

Mohamed says he had documented about 200 cases of divorce in the city of Idlib and its western countryside because of the spreading of this type of marriage, which offers no future for the children. He called on the international community and humanitarian organizations to find a solution.

Ahmed, a media activist in Idlib city who did not want to reveal his last name due to the sensitivity of the subject, says awareness campaigns had been ongoing for a year and a half in the areas outside government control in an attempt to limit the phenomena.

He said there were thousands of children, and possibly tens of thousands, with unknown fathers in opposition-held areas.

Ahmed said the only solution is to draft a law to allow these children to be legally registered in order to correct their ambiguous legal situation, which is depriving them of Syrian nationality and an education.

“We are facing a social disaster in every sense of the word,” he said.