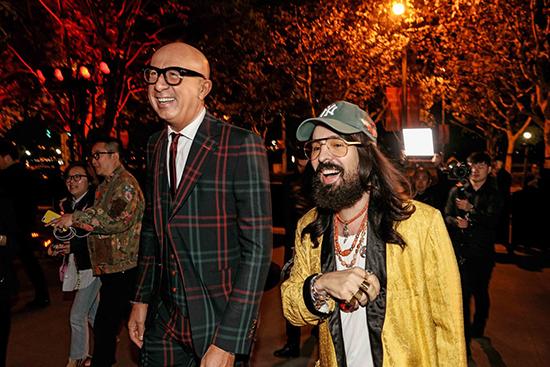 A few months ago, the brick wall on Lafayette Street that’s normally splashed with Gucci murals by Ignasi Monreal and Coco Capitán was painted with something even more curious: the face of Marina Abramović, plus the words “Maurizio Cattelan—The Artist Is Present.” Art buffs quickly recognized it as a dupe of the poster for Abramović’s performance piece of the same name in 2012, in which she invited guests to sit face-to-face with her at the Museum of Modern Art. Did this mean she’s staging round two? And what does Cattelan have to do with it—or Gucci, whose logo was included along with the dates (October 11–December 16) and a location, the Yuz Museum in Shanghai?

So many questions! In a way, the mural told you everything you need to know about the exhibition. It is, in fact, named after Abramović’s piece, but it isn’t a direct copy; Cattelan isn’t sitting face-to-face with museum visitors in Shanghai. It does challenge our ideas about copying, originality, and art in general, though, and like the mural, it’s a little perplexing. Cattelan worked side by side with Alessandro Michele, whose Gucci collections have challenged fashion’s ideas of copying and appropriation in similar ways. The exhibition, which opened on the first day of Shanghai Fashion Week, isn’t dedicated strictly to Cattelan’s work, nor is it about Abramović (or Michele), really. It’s a winding, immersive series of rooms in the Yuz Museum, and each features disparate (sometimes clever, sometimes funny, sometimes off-putting) works by more than 30 artists. In one, Cattelan re-created a miniature version of the Sistine Chapel, complete with copies of Michelangelo’s ceilings and The Last Judgment behind the altar. In another, there’s an Icelandic singer behind a velvet curtain, who startles you with a quiet song when you enter; another is a “gift shop” full of fake tchotchkes (including a Gucci bag made entirely of Legos by Andy Hung). You think you’ve taken a wrong turn when you find yourself in the bland, familiar-feeling (but nonfunctional) public bathrooms, and then you’re in what feels like a traditional Chinese home. Another room houses a massive industrial machine that mimics the digestion process (yes, it’s gross!), and the final space is painted with a photo-realistic backdrop of the Hollywood sign, plus a real highway guardrail and fake palm trees, so you can trick your friends with a selfie. In the corner is a New York Times newspaper dispenser with your parting gift: a “newspaper” featuring a collection of real New York Times stories reporting on copy and appropriation disputes.

“Alessandro came to me with two words: Shanghai and copies,” Cattelan explains. “He dared to assign this task to me, and I was given total freedom of choice regarding the artists and their works. A complex exhibition like this one is never reducible to one clear concept, and this is what I love about art, and what Alessandro respected from the very beginning,” he continues. “We share genuine respect toward what preceded us, and at the same time, we are staunch supporters of the idea that the copy is the original. We found ourselves halfway, where iconography meets icons, and where celebrated originals become timeless icons through a simple act of repetition and propagation.” Vis-à-vis, to copy is to appreciate and celebrate an artwork (or bag or sweater). In that way, Michele’s involvement makes a bold statement. His collections for Gucci routinely include copies or literal references: He’s put Disney characters on knits, reimagined Chinese pajamas, and created sparkling embroideries based on Japanese artwork. His much-discussed reinterpretation of Dapper Dan’s circa-1980s fake Louis Vuitton jacket led to a Gucci x Dapper Dan atelier in Harlem, and for Resort 2018, he even made his own “genuine fakes” with “Guccy”-logoed dresses and bags. “The Artist Is Present” takes it many steps further.

“Alessandro is working hard on pushing the way we think about fashion a little further, and I’m thankful for that,” Cattelan adds. “I attended his last fashion show in Milan for [Fall 2018 and] I found his work very much similar to a curator’s approach. We talked a lot about the ‘clones’ the models would carry with them, [which] was one of the inspirational starting points for the show.” If only he’d gotten a hold of some of those creepy Makinarium heads and dragons for the exhibition! And in a culture of animosity toward copying and appropriation, “The Artist Is Present” is bold in its assertion that it’s not a “bad thing,” nor is it avoidable. Cattelan has often said that it’s impossible to create anything truly “new” at this point, and sees a level of sincerity in copying. “Starting from its title, ‘The Artist Is Present’ aims at questioning what copying can be if we disregard every negative connotation and begin looking at it from a wider angle,” he says. “Appropriating and copying, in this vision, can be seen as an act of love and respect in confront of the original. Creativity, to me, has always been related to the skill of sharing and editing, since the very beginning of art history. It’s the nature of representation: Primitive [humans] painted hunting scenes on the wall of their caves so that their descendants [could] learn how to get food. When this show is finished, the title itself should remain as an occasion to tell a story. And I can already imagine people telling it: Once upon a time, there was only one ‘The Artist Is Present.’ Then, there were two.”

The exhibition has already captured the attention of millennials and Generation Z art lovers in Shanghai, but given its immersive, experiential vibe, those who can’t make it to China could get a feeling for it on Instagram. Unlike stuffier exhibitions—which often prohibit cell phones—“The Artist Is Present” captures Cattelan and Michele’s lighthearted, anti-stuffy shared point of view. It’s literally the opposite of precious and rarefied; it’s happily derivative. I’ll leave you with a loftier sign-off from Cattelan: “Every living organism renews itself through continual cell replacement, [so] we’re all replicas of ourselves, in the end, and our identity is always transforming.” It’s a bit like Theseus’s paradox: If you replace every part of a ship over time, is it the same ship, or a new one? And if our cells have completely changed since birth, are we the same person, or simply an imperfect copy? As Cattelan writes in his catalog, “to copy is to love,” like the old adage that imitation is the sincerest form of flattery. He argues that it brings greater awareness to the “original” artist, too, and could extend their legacy. You’ll have to decide for yourself by getting to Shanghai before December 16—and if you can’t make it, take a first pass by flipping through photos of the exhibition here.