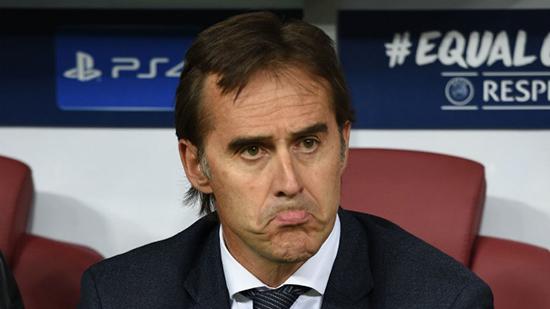 Julen Lopetegui looks to be on borrowed time as head coach of Spanish giants Real Madrid after yet another defeat.

The former Spain coach was appointed boss at the Bernabeu only this summer, but Lopetegui is facing the sack following Real’s home defeat against Levante in La Liga on Saturday. The 2-1 loss was Real’s third in a row – and five games without a win marks the club’s worst run for more than ten years.

Holders Real return to Champions League action against Viktoria Plzen tomorrow night but next weekend Lopetegui’s side travel to the Camp Nou to face Barcelona in the first El Clasico of the season.

Will Lopetegui still be in charge when Real face Barcelona on Sunday? According to a poll published by Spanish newspaper Marca, 53% of 160,000 users have voted in favour of Lopetegui being sacked before El Clasico.

However, not all supporters lay the blame on the Real coach. AS.com says that 87% of fans on its poll say president Florentino Perez is responsible for the current crisis.

Lopetegui: Real’s DNA is to fight

Speaking to reporters after the Levante loss, Lopetegui said he and his Madrid players were ready to battle. He said: “What I’ve learned about this club is to fight. That is the DNA of this club, that’s what we’re going to do, fight. Both the players and the coaches. We know results haven’t been great but we are going to turn this around.”

When asked if he would be in charge for El Clasico against Barcelona, the 52-year-old added: “I’m here now, that’s all I can say. I am the coach at this moment. If you ask me what is going to happen in a month or a year I can’t tell you. We’re focused on the present.”

Captain Sergio Ramos has urged Real fans to keep believing and has called upon the club to be united behind the under-fire boss.

The Spain defender told reporters: “Individual mistakes have condemned us but we should not point the finger at anyone, the only way to turn this around is to be united.

“Lopetegui is a very motivating person, he convinces, and we have to believe, he is the first to believe, we need unity. If I am asked for an opinion, I give it, but I do not think that an opinion of mine could influence such an important decision as the coach’s continuity.”

Goal.com understands that Lopetegui is “likely to be in charge against Barcelona”, but a poor result against Plzen on Tuesday could force the Real board to make a change.

A number of media outlets report today that Lopetegui is very near to the sack. The Daily Mail says that Lopetegui’s firing is “edging closer” while Sky Sports sources claim he will be out soon.

Citing a report on Spanish radio, the Evening Standard says that Lopetegui is hanging on to his job but has been described as “virtually sacked”.

The most damning headline of the day is from Spanish outlet AS, which says Lopetegui is a “dead man walking”.

Real Madrid’s next manager: the candidates

The Daily Mail reports that Madrid B team coach Santiago Solari has hinted he’s on standby for the top job should Lopetegui get his marching orders. The Daily Mirror backs up the speculation that Solari is the top choice to replace Lopetegui, but the Daily Express says that Real’s players are against Solari taking over.

Tottenham’s Mauricio Pochettino is another target, Joe.co.uk reports, while the Mirror says former Arsenal manager Arsene Wenger is on a five-man shortlist. Marca adds that ex-Chelsea chief Antonio Conte is also a frontrunner.

However, the “surprise No.1 choice” is none other than Manchester United gaffer Jose Mourinho, claims Metro. The Portuguese has already had a three-year spell managing Madrid and the Spanish club’s directors believe he could be the man to turn their fortunes around.

Cristiano Ronaldo’s departure in the summer has no doubt had a huge effect on the Real team. They have struggled to score goals and look less dangerous without their former talisman.

Players such Chelsea’s Belgian ace Eden Hazard and England forwards Harry Kane and Raheem Sterling have been linked with a move to Spain. But today it is reported that former Barcelona striker Zlatan Ibrahimovic could be a loan target in the January transfer window.

ESPN says that Real want another No.9 in the new year and LA Galaxy star Ibrahimovic, 37, is a shock candidate to provide a short-term fix.