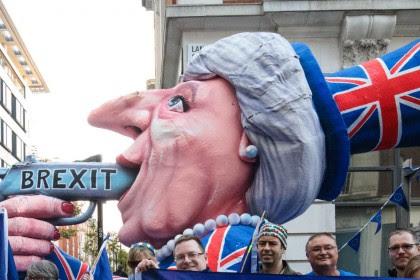 Tory Brexiteers have moved to diffuse a row over “vile” language used anonymously by some of their own MPs against Theresa May ahead of a crunch week for the prime minister.

Jack Blanchard for Politico writes that divisions over Brexit have turned the party into “a powder keg”, with open talks of an imminent vote of no confidence against May, and “the feverish atmosphere led at least one MP to brief Sunday newspapers in, frankly, horrible terms”.

The Mail on Sunday was told May should “bring her own noose” if she comes to the backbench 1922 Committee meeting on Wednesday, while another senior MP told the Sunday Times: “The moment is coming when the knife gets heated, stuck in her front and twisted. She’ll be dead soon.”

Yet another said May was now entering “the killing zone”, and a fourth remarked: “Assassination is in the air.”

References to knifing, hanging and assassination have sparked outrage across the political spectrum, particularly in light of the brutal murder of MP Jo Cox in the run up to the EU referendum.

The former Brexit minister Steve Baker, one of the key figures in the hardline Brexiteer European Research Group, told the Commons that those who briefed against the prime minister in terms of nooses and knives have “thoroughly disgraced themselves” and should have the whip withdrawn.

Scottish Tory MP Paul Masterson was more blunt, saying: “If I was told to bring my own noose to my next surgery, that I’d be knifed, or assassinated, my staff would report it to the police. I don’t really see why comments made by snivelling cowards on the back benches towards the prime minister should be treated differently.”

“There has been so far a surprising display of loyalty from MPs, many of whom have condemned the tone of the language used over the weekend,” The Guardian reported after the prime minister updated MPs about the progress of Brexit talks.

The paper adds that “the backlash against that may, ironically, have bought the prime minister a bit more time”.

Sensing a shift in mood but with a leadership challenge still very much on the table, senior Brexiteer Iain Duncan Smith last night said the hostile rhetoric had “nothing to do with our politics [and] nothing to do with this issue”.

Speaking in Brussels after a meeting with EU negotiators, the former party leader suggested that whoever was responsible “needs to have the fullest weight of the Conservative Party on them”.

However, it remains to be seen whether a toning down of rhetoric will be matched by a willingness among hardline Brexiteers to fall in line behind the prime minister.