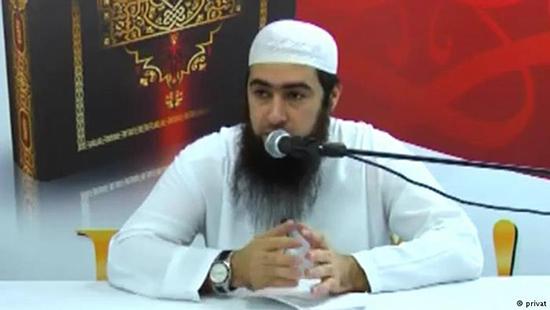 For years, the organization “The True Religion” provided a rallying point for radical Muslims in Germany — some of whom left to join IS. Naomi Conrad met Abu Dujana, one of the movement’s most prominent Salafi preachers.

There was nothing remarkable about the friendly, polite man with the long, dark beard, sporting a grey hoodie and blue jeans. Nothing, at first sight that is, to distinguish him from the young parents pushing prams and students milling around the busy, central intersection in the tranquil western German city of Bonn he had suggested as a rendezvous point.

But, given his contacts and statements in the past, one source in the German domestic intelligence agency told DW, he was “likely” part of the jihadi spectrum of Salafism, one of the most conservative branches of Islam.

Or, as Said El E., who goes by the name of Abu Dujana, told DW, the “only true religion … the only truth there is.”

He belongs to a movement that has spread rapidly across Germany and then Europe, coinciding with the rise of the “Islamic State” (IS).

There was a time when earnest young men, many of them sporting long beards, would congregate in pedestrian precincts all across Germany. They would set up imposing banners, inviting shoppers to “Read! In the name of your Lord,” and hand out free copies of the Quran in German to anyone willing to stop and engage with them.

Until 2016, they were a common sight on sunny weekends, ubiquitous even.

Read part I of our series: Invisible and dangerous: The Salafist scene in North Rhine-Westphalia

That Salafi movement had been founded in 2005 by a Palestinian businessman, Ibrahim Abu Nagie,who lived in the western German city of Cologne. His declared goal was to spread Islam and distribute millions of copies of the Quran.

The organization’s headquarters was a vast warehouse on the outskirts of Cologne, which also served as the movement’s production studio.

From there, members would upload sleek sermons and catchy short videos to YouTube and other social media channels.

His dream, Abu Nagie told DW in an interview in the warehouse back in 2014, copies of the Quran stacked up high along the walls, was that every single German convert to Islam. One day, he added, an Islamic theocracy would emerge in Germany, “organically, from below.”

For a while, his strategy seemed to work: Young people flocked to the organization that reached out to them through an active online presence, easily accessible language and sermons in German — a first in Germany, where imams traditionally preach in Arabic and Turkish, alienating many young Muslims born and raised here.

From Germany, the movement spread across Eastern and Western Europe.

Today, as customers trickled into the cafe picked for convenience rather than comfort, Abu Dujana recalled the heydays of “The True Religion” — boasting that until it was banned, one or two people would convert every day.

While that is most likely an exaggeration, the movement did attract numerous Muslims and non-Muslims alike, many of them young people seeking a sense of belonging and acceptance.

Back then, he told DW, he would travel every weekend, visiting mosques all across Germany, and indeed Europe.

‘Very proud of what we did’

“I am very, very proud of what we did,” Abu Dujana said, smiling, as he recalled the comradery, the “aura,” as he put it, of the group of young men who spread an intransigent Islam, which harks back to the time of Prophet Mohammed. One that divides the world into “true Muslims” pitted against everyone else. The nonbelievers.

Salafis espouse a strict interpretation of the Quran, which most Muslims consider far too radical. Listening to music, for example, is seen as “haram,” or forbidden, and women are expected to cover themselves — many don a full-face veil.

Only a minority within the movement support violence and an even smaller number will act upon their beliefs.

But, as hundreds of Germans left for Syria and Iraq following the proclamation of IS’ self-styled caliphate in 2014, German authorities began to monitor the movement more closely.

In November 2016, they finally acted: They banned the organization and confiscated thousands of copies of the Quran. The Interior Ministry argued that the organization endorsed armed jihad, was anti-constitutional and provided a breeding ground and later rallying and recruiting point for violent Islamists who travelled to Syria and Iraq.

The ban was a turning point.

Salafi preacher Abu Nagie never returned from a foreign trip, many leading figures withdrew from the spotlight; others were killed in Syria and Iraq. The movement, sources within the security agencies and deradicalization experts told DW, has scattered, operating in private homes, rather than mosques where they risk being monitored by security agencies.

Yet over the course of several hours, Dujana was adamant that the banned organization had nothing to hide. The authorities had cracked down on the movement, he insisted, because “they know that it is the truth. They know that more people would convert.”

He spoke with the eloquence and ease of one used to giving sermons, berating a society that discriminated against men and women like him: a German born to Moroccan parents, a 36-year-old, who, he said, dropped out of his degree in computer studies to concentrate full time on “The True Religion” movement.

Today, he sells used cars, mostly to Morocco, and preaches in private homes, given that, he explained, most mosques turned him away out of fear of the authorities.

He kept returning to the topics of Islamophobia and discrimination against Muslims, both of which, he said, he had experienced from a very young age. In a society that rejects Muslims, he mused, “you shouldn’t be surprised when some people go crazy and commit stupid acts.”

But, he insisted that he and the “The True Religion” were not to be held accountable for other peoples’ actions: “You might as well blame their teachers or doctors.”

Dujana didn’t deny that some people had left Germany to join IS in Syria and Iraq. And he admitted that he knew several of them personally. “They all had pure intentions.” They all wanted, he explained, to help the oppressed people of Syria.

But, he added quickly, they had been misguided, manipulated even by the so-called Islamic State — the caliphate which he derided as “laughable”.

It was not the right way, he insisted. “Look, if you follow that logic, I could declare my own caliphate,” he said. “I’m sure I could gather several followers around me, too.”

And, when pushed, he said the extremist organization could be labeled as “terrorist,” if, he explained, “you define terrorism as killing innocent people and spreading injustice, then yes, you can call it terrorism.”

In fact, he claimed, he had dissuaded a number of teenagers from leaving Germany and joining IS.

During the entire conversation, Dujana chose his words carefully, never crossing the line of what is permissible to say and express in Germany: He didn’t like homosexuals, he said, but nor did many Christians; his eight-year-old daughter had donned the hijab, but from her own free will; he did not consider Shias Muslims, only to add that he did not want to start a fight with anyone.

‘There is no room for interpretation in religion’

But when it came to the question of Muslims adapting to German society, he was clear: “There is no room for interpretation in religion, not even a millimeter, whatever the cost.”

Today, he said, he receives numerous requests from “brothers and sister” in search of religious advice, ranging from marital problems to concerns about how to educate their children.

They turn to him, he said, because he was seen as a “figure of authority.”

It is these kinds of meetings that worry the security agencies: They are unable to keep close tabs on what is being said and preached.

Dujana grinned: “There’s your cover story: [Muslims] live in a parallel society and follow their own laws.” But, he quickly added, he only doled out “advice,” “there’s nothing more to it.”

Later, with the interview concluded and the dark clouds having turned into a persistent drizzle, he pulled his hood over his head and disappeared back into the crowd of commuters hurrying home.