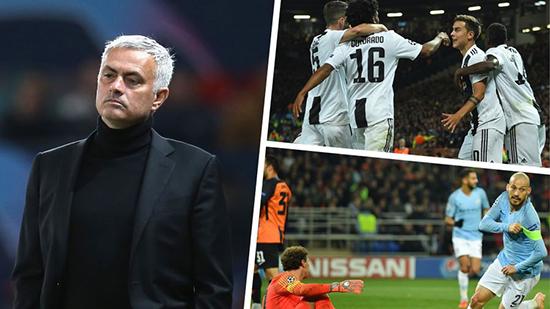 Manchester United were outclassed as Cristiano Ronaldo’s Juventus overcame Jose Mourinho’s men in a Champions League clash that was worryingly one-sided at times.

It had been 15-and-a-half years since the most decorated sides from England and Italy last met in a competitive fixture, but anyone watching Tuesday’s Old Trafford encounter will be under no illusion who is now in the better health.

Juventus toyed with United at times as Ronaldo enjoyed a winning return to his old stomping ground, with his cross leading to Paulo Dybala’s goal on an evening that sometimes threatened to be far worse worse than the eventual 1-0 scoreline.

Mourinho’s side did improve in the second half and former Bianconeri midfielder Paul Pogba hit a post, but the Italian giants held on to move five points clear of second-placed United in Group H as a night that started with frustration ended in disappointment.

Manchester City took a huge stride towards qualification for the Champions League last 16 with a commanding 3-0 win over Shakhtar Donetsk in Ukraine.

Manager Pep Guardiola may have claimed City are not yet be ready to win the competition in the build-up to the game in Kharkiv, but they underlined their status as favourites with an outstanding performance.

David Silva twice hit the woodwork before rewarding the visitors for their early dominance with the opening goal after half-an-hour and Aymeric Laporte quickly added a second. Bernardo Silva came off the bench to wrap up a victory that took City to the top of Group F 19 minutes from time.

City were beaten on their last visit to the Metalist Stadium but there never seemed any danger of a repeat and one statistic emphasised their dominance as they recorded 24 shots.

Lyon were denied victory by Hoffenheim forward Joelinton’s stoppage-time equaliser in a 3-3 draw in Germany.

Andrej Kramaric struck twice in the first half for Hoffenheim after Bertrand Traore had given Lyon the lead.

The French side regained the lead through Tanguy NDombele (57) and Memphis Depay (67), but Joelinton struck in the second minute of added time.

The German champions, who went down to rare back-to-back Bundesliga defeats earlier this month, went ahead through Javi Martinez’s scissor kick in the 61st minute.

Robert Lewandowski tapped home the second, but Bayern stay behind Ajax in the table on goal difference after the Dutch side snatched a 1-0 win against Benfica.

Ajax appeared to be heading for a stalemate against the Portuguese side, but Morocco midfielder Noussair Mazraoui drilled home a shot from outside the area in the second minute of stoppage time.

Real Madrid remain top of Group G as goals in each half from Karim Benzema and Marcelo secured them a 2-1 win against Viktoria Plzen at the Bernabeu.

Patrik Hrosovsky (78) pulled one back for the Czech side to ensure a nervous finish for the out-of-sorts champions.

Roma stay behind Real in the table on goal difference as Edin Dzeko’s first-half double and Cengiz Under (50) helped secure a 3-0 home win against CSKA Moscow.