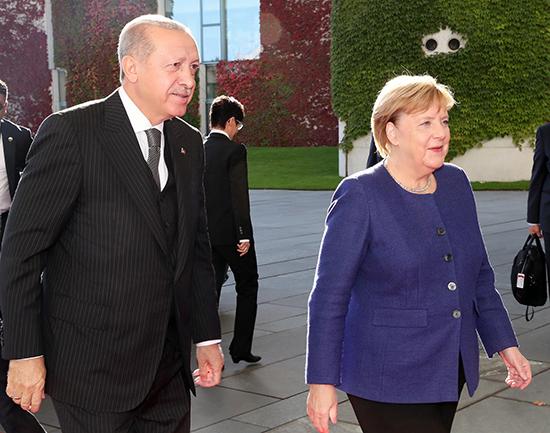 Erdmann’s comments come prior to the upcoming two-day visit to Ankara on Oct. 25 of a 100-member delegation of German businesspeople, including 35 representatives from the country’s leading companies, headed by Economy and Energy Minister Peter Altmaier.

Two important meetings are planned as part of the visit, one of which is a Turkey-Germany Joint Economic and Trade Commission (JETCO) meeting that will be held for the first time. The following day, an energy forum to be hosted by Turkish and German energy ministers will take place, according to Erdmann.

“This visit should be regarded as a step to solve the current economic issues between the two countries,” Erdmann said, adding that the meetings in Turkey would also allow for discussions in bilateral relations as well as ensure that German firms can convene with Turkish government officials.

Relations between Ankara and Berlin suffered several setbacks over the past years, but both sides have taken steps in recent months towards improving ties.

Erdmann explained that he witnessed firsthand the “close and intense” bilateral relationship between the two countries during Erdoğan’s meetings.

The German ambassador described Turkish-German relations as “unique” given that such close relations are not seen with any other countries that are so geographically distant or that have such diverse cultural and geopolitical backgrounds.

There are currently 3.5 million Turkish people living in Germany and some 90,000 Turkishbusinesses are located there. On the German side, 7,200 German businesses in Turkey, including Bosch, Siemens, and Mercedes, produce in Turkey and export worldwide, Erdmann noted.

“The trade volume has shown an upward trend in recent years and reached €37 billion [approximately $42 billion] in 2017. But what makes 2017 special is that Turkey’s exports to Germany showed increases to a considerable extent,” he added.

The future is in renewables

He considers that Turkey and Germany, both coal-rich but poor in oil and gas resources, have parallel approaches to energy investments through renewables.

“I believe Germany and Turkey’s future is in renewables especially as a country that has a vast land area with coasts to two big seas,” he said.

He also cited that Turkey’s big potential in both onshore and offshore renewable sources ensures that both countries have framework conditions to develop cooperation in the energy field.

German-Spanish company Siemens Gamesa has installed wind turbines with over 700 megawatts (MW) of capacity in Turkey since entering the country’s market for the first time in 2010.

Erdmann said Germany commends Turkey’s aim to expand its railway network in the country, which is 2.5 times bigger than Germany.

Recently, German media outlets have claimed that Turkey and Germany are in talks for a 35-billion-euro (approximately $40 billion) railway modernization project led by a Siemens consortium.

“This step is pleasing both in terms of freight shipment and passenger transportation. In fact, Turkey and Germany’s partnership in this sector dates back 100 years. Currently, I can say that Turkey and Germany are in talks about expanding these lines but I cannot provide any more details on that,” he said.