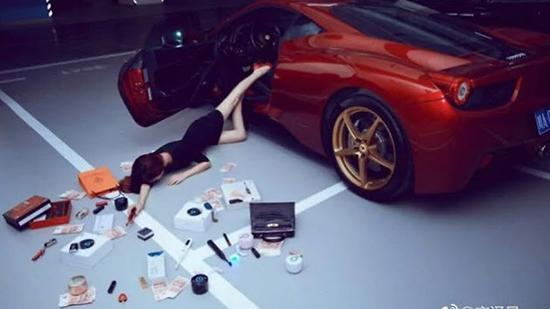 The new challenge sweeping China is believed to have started after a DJ posted a photo of himself tripping out of a private jet.

A new social media craze called the ‘Falling Stars Challenge’ has swept the internet with hundreds of thousands of posts sporting the trend of people falling out of their luxury vehicles and spilling their possessions on the ground.

The challenge is believed to have started in Russia, back in July, after DJ Smash posted a photo of himself on Instagram lying on the floor outside his jet.

Since August, China picked up the trend where it has been dubbed the ‘Flaunt Your Wealth Challenge” and more than a million posts have been shared on Chinese social media site Weibo.

The trend picked up steam when well-known figures captured themselves lying on the floor – as if having just fallen over – with their valuables spread around them.

Now everyone from workers to students are posting their own satirical version of the challenge.

One account, DJI for Value Q, made an Instagram video set to Dr Dre and Snoop Dogg’s “The Next Episode”. It involved one man carrying all his filming equipment before he accidentally falls over, spilling his possessions on the pavement.

Despite its popularity, police have fined a woman in China for performing the challenge on a pedestrian crossing in Taizhous, a city in the eastern Zhejian province.

The craze has also been critiqued for highlighting the growing wealth gap in China. The nation is home to more billionaires than the US and has more than 30 million people living in what their government classifies as poverty, according to Forbes.