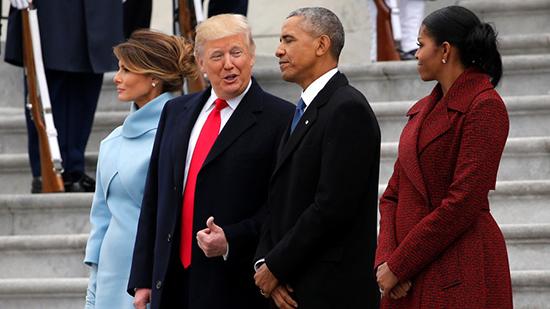 Agreeing with Barack Obama is not something you’d expect out of US President Donald Trump, especially not on immigration. Yet that’s exactly where Trump is ‘100 percent’ behind the words of Obama – a 2005 Obama, that is.

“I agree with President Obama 100%!” the current occupant of the White House tweeted out on Tuesday night. Unfortunately for Trump’s critics, the video contained in his tweet featured Obama, then a US senator from Illinois, condemning illegal immigration.

I agree with President Obama 100%! pic.twitter.com/PI3aW1Zh5Q

“We simply cannot allow people to pour into the US, undetected, undocumented, unchecked and circumventing the line of people who are waiting patiently, diligently, lawfully to become immigrants in this country,” said Obama in December 2005.

Trump has reached for Obama’s words in a bid to block the “caravan” of migrants currently moving through Mexico and headed for the US border. It has swelled from the initial 4,000 who left Guatemala, Honduras and El Salvador, reportedly to over 14,000, as many Mexicans joined them.

The US president has vowed to not let the caravan cross the border, saying he would use the US military if necessary as well as cut off all US aid to Mexico and the three Central American countries.

Guatemala, Honduras and El Salvador were not able to do the job of stopping people from leaving their country and coming illegally to the U.S. We will now begin cutting off, or substantially reducing, the massive foreign aid routinely given to them.

Obama’s immigration remarks were part of a bipartisan push for the Comprehensive Immigration Reform Act (CIRA), sponsored in 2005 by Senator Arlen Specter (R-Pennsylvania). Among the familiar names involved in backing the bill were Senators John McCain (R-Arizona), and Lindsey Graham (R-South Carolina).

The bill aimed to fortify the US-Mexican border, while granting amnesty to many illegal immigrants and increasing the number of guest workers through a “blue card” visa program. CIRA never became law, however, because of the differences between the House and Senate versions.

After he was elected president in 2008, Obama stepped up deportations of illegal immigrants. He also sought to shield some of them from deportation through executive programs such as DAPA and DACA. The first was never implemented, while the second was rescinded by the Trump administration, but remains tangled up in lawsuits.