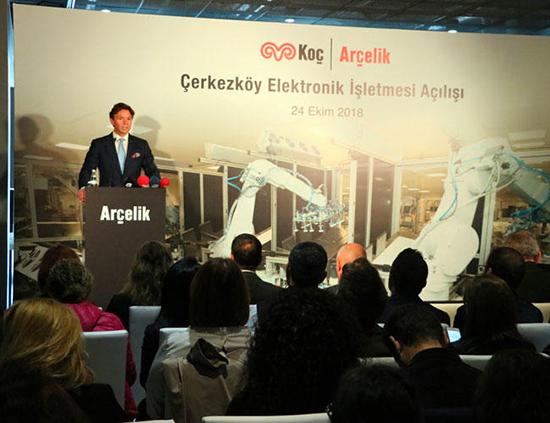 Arçelik, the home appliances arm of Turkey’s biggest industrial conglomerate Koç Holding, has opened a new electronics factory in the northwestern district of Çerkezköy for an investment of 500 billion Turkish Liras (parity of $88 million on Oct. 24, 2018).

The company plans to export nearly 65 percent of its output, top company representatives said during an opening ceremony on Oct. 24.

“Our smart factory, in which we have invested 500 billion liras, will be a key milestone in our sustainable development and digital transformation journey. With our new factory, we will add an additional 3.2 million television production capacity, thus further strengthening our market share,” said Koç Holding CEO Levent Çakıroğlu, as quoted by Reuters.

Arçelik CEO Hakan Bulgurlu told Reuters the company had a strategy to expand overseas with local brands, adding that new acquisitions would be made in the upcoming period.

“Our focus is on emerging markets, especially Asian, Near Eastern and African markets,” he said.

The company sells washing machines, dryers and refrigerators in many markets under labels including Beko and Grundig.

Noting that the United Kingdom was one of the largest markets of the company, Bulgurlu said the U.K. market slightly contracted ahead of Brexit.

“We will undertake our logistics preparations for the post-Brexit period, but we do not plan any extensive stockpiling,” Çakıroğlu added.