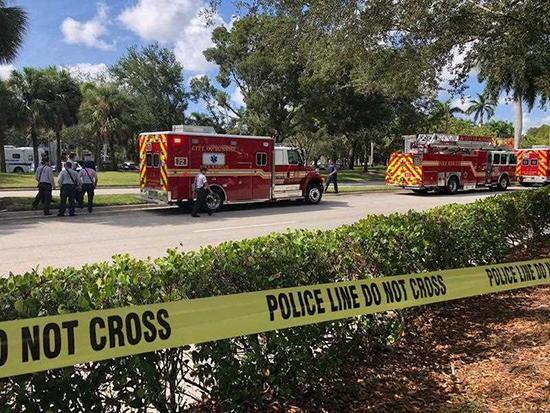 Pipe bombs were sent to Barack Obama, other top Democrats and CNN in a coordinated “effort to terrorise” days before polarising US elections.

US President Donald Trump has called for unity after suspected explosive devices were mailed to broadcaster CNN and leading Democrats, including former president Barack Obama and the Clintons, saying acts of political violence have “no place” in the United States.

Former Democratic presidential candidate Hillary Clinton was among some of the most high-profile Democrats targeted with America bitterly divided ahead of November 6 elections – seen as a referendum on the Republican president.

CNN is well known for its robust coverage of the Trump administration and is routinely singled out for harsh words by the president, who succeeded Mr Obama and defeated Ms Clinton in 2016.

“This clearly is an act of terror attempting to undermine our free press and leaders of this country through acts of violence,” New York Mayor Bill de Blasio told a news conference.

The package containing the device sent to CNN also had in it a suspicious powder, according to the NYPD.

A law enforcement official told CNN examination of all of the devices shows them to be constructed along similar lines, with at least one device containing projectiles such as shards of glass.

The devices are rudimentary but functional, CNN has reported.

“So far the devices have been what appear to be pipe bombs,” FBI agent Bryan Paarmann said.

The spree of bomb alerts was kicked off Monday with a device found at the New York home of billionaire liberal donor George Soros.

All the packages reportedly included the return address of Debbie Wasserman Schultz, former chairwoman of the Democratic National Committee.

A suspicious device sent to the Manhattan office of New York’s Democratic Governor Andrew Cuomo turned out to be a false alarm, as did a scare in the offices of rising star Senator Kamala Harris.

Mr Trump, speaking from the White House, used his presidential perch to appeal for unity, saying acts of political violence have “no place” in the United States

Critics on the left accuse his rhetoric-laden presidency of emboldening right-wing extremists and condoning violence.

“At these times we have to unify and send one very clear and strong message that acts of political violence of any kind have no place in the United States of America,” Mr Trump told an event on the opioid crisis.

But the top two Democrats in Congress accused President Trump of fanning the flames of political unrest and dividing Americans, as tensions soared on a day of foiled pipe-bomb attacks on high-profile Democrats.

“Time and time again, the President has condoned physical violence and divided Americans with his words and his actions,” House Minority Leader Nancy Pelosi and Senate Minority Leader Chuck Schumer wrote in a statement, pointing to the president’s expressions of support to rally attendees who engage in violence with protesters, and branding the press as enemies of the people.

Mr Trump, addressing the threats less than two weeks before crucial midterm elections, said acts of political violence “have no place in the United States,” but the pair said the president’s words “ring hollow until he reverses his statements that condone acts of violence.”

White House Press Secretary Sarah Sanders said anyone responsible would be “held accountable to the fullest extent of the law” as the Secret Service, the FBI and local police plunged into a full-scale criminal investigation.

CNN evacuated its New York bureau Wednesday after the pipe bomb together with an envelope containing white powder was found in the mailroom. A bomb squad secured the device and removed it for investigation, police said.

The packaging was addressed care of CNN to former CIA director John Brennan, who has worked as a television analyst but not for the channel.

There has been no claim of responsibility and no one was yet thought to have been arrested.

Ms Clinton thanked the US Secret Service and called out the environment of “deep divisions”.

“We are fine thanks to the men and women of the Secret Service who intercepted the package addressed to us long before it made our way to our home,” she said.

“Every day we are grateful for their commitment, and obviously never more than today, but it is a troubling time isn’t it? And it’s a time of deep divisions, and we have to do everything we can to bring our country together.”

The Secret Service said the packages were “immediately identified during routine mail screening procedures” and that neither Ms Clinton or Mr Obama were ever at risk of receiving them.

Republican lawmakers followed the White House in issuing condemnations, just over a year after a shooter angry about Mr Trump shot four people at a congressional baseball practice near Washington.

“Violence and terror have no place in our politics or anywhere else,” tweeted senior Republican lawmaker Steve Scalise, who was seriously injured at the baseball practice in June 2017.

Mr Soros, the target of the first device, has long been a hate figure for right-wing groups and lives in Bedford, New York, not far from the Clintons.

The 88-year-old billionaire is one of the world’s richest men who supported Clinton in 2016, and has been accused by nationalists the world over of sponsoring protests and seeking to push a liberal, multicultural agenda.

Earlier this month, Mr Trump accused Mr Soros of paying demonstrators to protest against the nomination of Supreme Court Justice Brett Kavanaugh, who was accused of attempted rape in high school.

Mr Soros has also been falsely accused of funding the caravan of migrants moving north from Honduras through Mexico en route to the US border.

Mr Trump, hitting his anti-immigration agenda hard on the campaign trail, has similarly blamed Democrats for inciting the caravan.