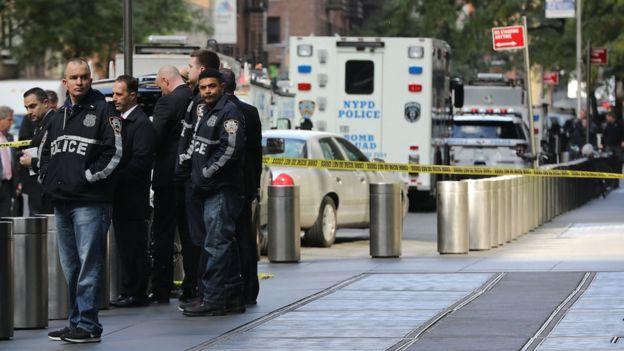 President Donald Trump has called on people to be more civil in politics, after a series of suspected explosives were sent to high-profile US figures.

He was speaking after parcels were sent to CNN and top Democrats, including Barack Obama and Hillary Clinton.

None of the packages exploded. The FBI has launched a hunt for their sender.

The president’s critics called his latest remarks hypocritical, as he often uses vicious language against his opponents and the press.

Speaking at a Wednesday night rally in Wisconsin, the president vowed to catch the perpetrator and called on the media to “stop endless hostility”.

“Those engaged in political arena must stop treating political opponents as being morally defective,” he said.

“No one should carelessly compare political opponents to historic villains, which is done often,” he added.

However, the president made no specific reference to the intended recipients of the packages.

“There is a total and complete lack of understanding at the White House about the seriousness of their continued attacks on the media,” he said.

Who were the packages sent to?

Suspected bombs were sent to locations in New York, the Washington DC area and Florida, authorities said on Wednesday.

Explosive devices were sent to the following individuals, according to the latest FBI statement:

CNN’s New York office was evacuated on Wednesday morning after the package, addressed to Mr Brennan, was found in its mailroom.

Another package, believed to have been addressed to former Vice-President Joe Biden, is being sought by US federal investigators.

Why is this so political?

All the apparent targets are regularly criticised by conservatives – especially by President Trump.

Some Democrats have accused the president of inciting violence with his past rhetoric, while some of his supporters have said they believe the packages are part of a Democratic plot to win votes in the mid-term elections.

There is no evidence for this and the police have not released any information about any suspects.

The attempted attacks come just under two weeks before the mid-terms, with US politics highly polarised.

Mr de Blasio told reporters it was an effort to terrorize and “to undermine our free press and leaders of this country through acts of violence”.

On Wednesday, White House spokeswoman Sarah Sanders condemned the “attempted violent attacks” against the public figures. She then specified in a follow-up tweet that the White House also condemned threats made to CNN.

The president has repeatedly called journalists, and CNN in particular, “fake news” and the “enemy of the people”. Last week he praised a Republican congressman who had assaulted a reporter with a “body slam”.

Media captionNew York Governor Andrew Cuomo: “What is not good is overheated rhetoric and extremism that pushes people to violence.”

In a joint statement, top Democrats Nancy Pelosi and Chuck Schumer also said the president’s latest words “ring hollow until he reverses his statements that condone acts of violence”.

The FBI says its ongoing investigation is “of the highest priority”.

What was in the packages?

The devices are suspected to be pipe bombs. None of them exploded.

The ones addressed to Mr Obama and Mrs Clinton were intercepted by security services before they were delivered.

They were all sent in manila envelopes with bubble wrap, addressed with computer-printed labels. Each listed Debbie Wasserman Schultz, former chairwoman of the Democratic National Committee, as the sender, although her name was misspelt.

In a statement, the Florida congresswoman said she was “deeply disturbed” by the way her name was used.

The package addressed to Mr Brennan was sent to CNN as he was scheduled to appear on the network on Wednesday, US media report.

New York Police Commissioner James O’Neill also said law enforcement is analysing an “envelope containing white powder” that was found in the packaging of that device sent to CNN.

What have the apparent targets said?

Speaking at a campaign event in Florida, Mrs Clinton thanked the Secret Service and said she and her family “are fine”.

“It is a troubling time,” she said. “It is a time of deep divisions and we have to do everything we can to bring our country together. We also have to elect candidates who will try to do the same.”

A spokeswoman for Mr Obama declined to comment on the incident, and referred reporters to the Secret Service statement.