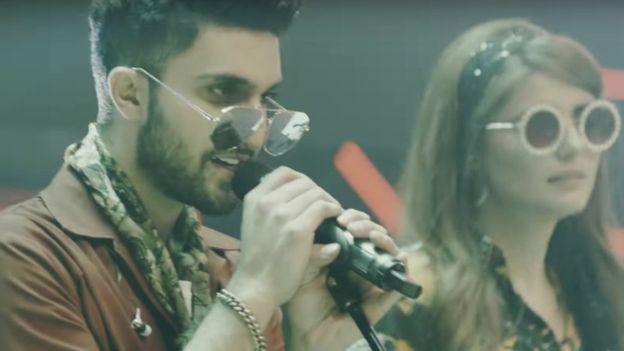 There are a lot of bad cover versions of songs but few have caused the kind of uproar seen in Pakistan this week, drawing in a government minister, a pop sweetheart and even Spiderman.

The video was posted on YouTube and it was at that point we all found out how angry this had made people. Rage usually reserved only for religion, politics and cricket came down upon the Ko Ko Korina cover – with a vengeance.

Things became truly surreal when Pakistan’s Human Rights Minister Shireen Mazari weighed in to describe it as a “massacre” of the classic song, questioning how producers had allowed this to happen.

The singers -pop sensation Mohmina Mustehsan and up-and-coming actor Ahad Raza Mir – did not take the criticism lying down.

He challenged the minister for her use of the word “massacre” and Mohmina drew inspiration from Uncle Ben from Spiderman to advise: “With great power comes great responsibility.”

So then obviously the Pakistani internet let rip with the inevitable Spiderman memes and bleeding ear jokes.

It also became an extended joke that cut very close to the bone with its debate about human rights – some declared the minister had a right to weigh in because the song was so bad it was itself a rights violation, but others pointed out the irony of the minster focusing on a song when there were more troubling issues in the country.

Ms Mazari, newly installed in the job, defended herself saying she had a right to her opinion and the issue had nothing to do with the human rights ministry, garnering support from many.

One of those who joined the debate was Shahbaz Taseer, the son of a politician murdered because he opposed Pakistan’s harsh blasphemy laws. His killer continued to be celebrated by many right up to his execution – with hardly any official figures condemning that.

Mr Taseer was himself held captive for almost five years by militants. In Pakistan humour is often used to make the horrors of daily life more bearable.

So Pakistan has sincerely engaged in a heated debate about human rights – and it’s all over a cover song.

For those who didn’t grow up in a Pakistani household, the song itself is instantly recognisable and loved. It’s sung at weddings and when young people get together for singalongs.

It was released in 1966 during the golden age of Pakistani cinema – part of the soundtrack of the film Armaan, starring the absolutely unrivalled romantic hero of the time Waheed Murad.

The lyrics are a man singing about his ideal woman. The chorus – where the phrase Ko Ko Korina is repeated – doesn’t really mean anything. But just as with most pop songs the melody is simple, catchy and easy to sing along to.

It was unconventional for its time, a turn away from the classical eastern music of the region, and has since been remade several times keeping it relevant for all ages.

“It’s not just a bit of nostalgia, it’s an inflection point in our cultural history,” says Fasi Zaka, a columnist and commentator.

So to give you an idea of the scale of the offence – Rafay Mahmood, cultural journalist at the Express Tribune newspaper, said it was as if Ed Sheeran had covered Queen’s classic Bohemian Rhapsody and botched it.

One of the strongest complaints is the overly choreographed nature of the performance.

“The kind of clothes they are wearing, they way they are acting, their antics; they seem too pretentious. It’s as if they are trying to pull off a retro act or feel,” says Mr Mahmood.

Coke Studio made a name for itself bringing together folk musicians with modern singers in collaborations that have been hugely popular – redefining music for a new generation.

“Over the years there’s been a feeling of an auteur-led effort into music, bringing a sheen to our historical legacy. But this one seems inauthentic,” says Mr Zaka.

Other people have said it sounds amateur and that the pair are just simply not very good singers.

But what started off as artistic critique has turned into something much darker.

Mohmina, a singer-songwriter, has had a meteoric rise. Last year she was the nation’s sweetheart, but after some controversial statements on social media she’s become a target for some. Ahad Raza Mir is also known for his good looks – not singing talent.

But the response to their performance has descended into personal attacks.

“It’s no longer about music. It’s about how badly can you hate Mohmina and Ahad Raza Mir,” says Mr Mahmood.

Both performers have addressed the intense backlash, with Ahad Raza Mir asking for more kindness, even when doling out criticism.

“If we can come together to hate something, we can do the same to love.”

But there’s something else going on here. There’s huge pressure for music coming out of Pakistan to live up to a high standard because it’s become intrinsically tied up with its international image.

Music, and specifically the success of Coke Studio Pakistan, has shown “we are peace loving people, we are the land of the Sufis, the land of the melodies”, says Mr Mahmood.

But that combined with the people involved and the history of the TV show have created a maelstorm of rage, or perhaps as Mr Mahmood put it: “I think we have a lot of free time and we love music.”