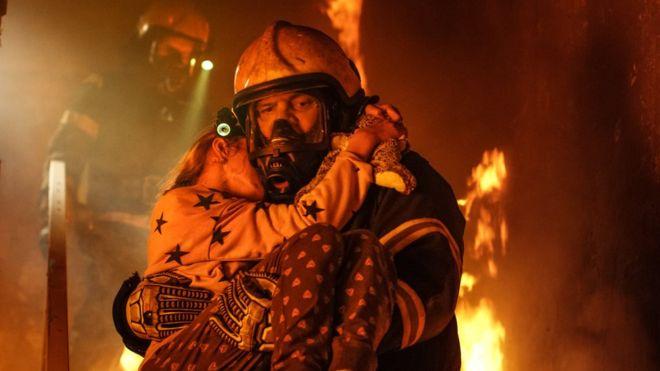 Adding a recording of a mother’s voice to smoke alarms could save lives, according to US scientists.

The study, published in the journal Pediatrics, found the modified alarms were more effective at waking children than conventional alarms.

And they had the potential to buy vital seconds to escape a burning building.

Fire chiefs welcomed the research, but said families should not worry about the alarms currently in their homes.

The research team at the Nationwide Children’s Hospital in Ohio said children were “remarkably resistant” to being woken up by sounds because they have longer and deeper sleep than adults.

The study compared a traditional high-pitch smoke alarm with voice-based ones.

176 children took part, and alarms were personalised with a recording of the mother’s voice instructing their child to wake up.

The experiments were performed in a sleep laboratory, and the alarms were played once the children were in the deepest phase of sleep.

Dr Mark Splaingard, one of the researchers, said: “The fact that we were able to find a smoke alarm sound that reduces the amount of time it takes for many children five to 12 years of age to wake up and leave the bedroom, could save lives.”

The researchers now want to test whether any voice will do, or if it has to be the mother. And they want to assess what impact such alarms might have on waking up adults.

Rick Hylton, from the UK’s National Fire Chiefs Council, said he was looking forward to seeing how the research panned out.

He said: “People shouldn’t be concerned about the effectiveness of their current smoke alarms.

“We know smoke alarms save lives so we ask that people ensure they have installed smoke alarms.

“They will alert occupants early if working, fitted and installed in the correct location. This gives adults, parents or guardians the opportunity to wake children, and leave the house.”