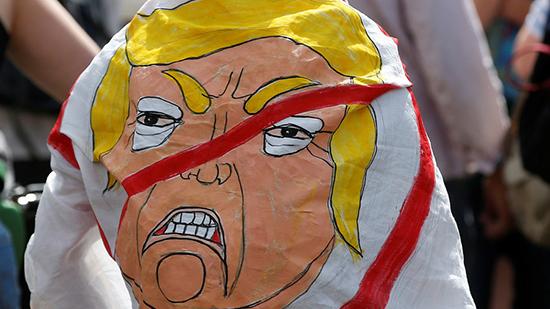 Frustrated by the failure of the Mueller investigation to turn up the requested dirt on their nemesis-in-chief, the media “resistance” asked a few spy novelists to predict a more appealing future in the Times’ literary supplement. The resultsrevealed some shoddy writing work, even putting aside their predictable endings (spoiler alert – he was colluding with the Russians all along!).

Zoe Sharp’s story was apparently written while she was held hostage in a Bond movie with a bunch of Soviet bad guys. A Russian agent (of course) checks into a hotel, meets another Russian carrying a briefcase with a Makarov pistol and Stolichnaya (because Russia), and gets drunk. The next morning, he tries to shoot the president, but the gun misfires. The crisis – what will Putin think, now that I’ve failed him?! – is averted when a Secret Service agent lends a helping hand. Get it? It’s funny, because even Trump’s staff want to murder him!

Social media was appropriately appalled, particularly given the timing of the story’s publication.

Sharp’s lazy fact-checking was called out as well – it takes a two-second Google search to find out that Glocks are not the Secret Service sidearm of choice.

The other stories are a marginal improvement, each describing their own (curiously similar) version of a reality in which the Mueller investigation has vindicated their conspiracy theories and Trump is on his way to impeachment, prison, or the morgue. All include petty digs at the president’s hair, speech patterns, or other obvious foibles.

Trump’s election has hastened a decline in journalistic standards that has seen once-respectable media outlets like the Times jettison fact-checking, accountability, and taste standards in favor of grinding their political axe. Journalists’ concerns about the Trump regime are not unfounded, however – his Justice Department has prosecuted more whistleblowers and leakers than even media darling Barack Obama, who previously held the record.

While the 2018 elections have been marked by vicious rhetorical attacks from both parties, Clinton, Eric Holder, and Maxine Waters have all been accused of calling for their supporters to physically attack GOP candidates and their voters. Several candidates actually have been attacked in the last month, and one man was arrested for mailing ricin to the White House and Pentagon.

Still, Trump was prepared to temporarily bury the hatchet in light of today’s events. He called for the country to “come together,” calling for a federal investigation of the mailings and unequivocally condemning the perpetrators. That wasn’t enough for CNN’s Jeff Zucker, though, who countered: “There is a total and complete lack of understanding at the White House about the seriousness of their continued attacks on the media.”