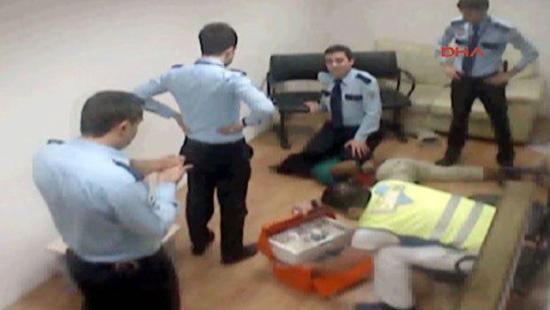 A Turkish prosecutor has sought a jail sentence of 16 years for four police officers and six years for a doctor over their suspected involvement in the death of an American tourist at Istanbul Atatürk Airport in 2013.

The case concerns the death of Tracey Lynn Brown, who died after an altercation with police as officers held her to the ground following her reported “aggressive” behavior.

Brown, 48, arrived in April 2013 at Atatürk Airport from the Uzbek capital Tashkent to transfer to a Chicago-bound Turkish Airlines plane and waited for 13 hours in the international arrivals terminal.

She had a quarrel with police officers and later wounded one with a pair of scissors, according to the relevant video footage. Police officers handcuffed Brown to a chair but she was able to release herself. In response, they forced Brown to the ground face down and handcuffed her from behind. They were seen putting pressure on Brown’s back, feet and hands with their knees for about 17 minutes.

Then the police officers also called a doctor in the airport identified as Mesut Ö., who ordered the medical team to inject Brown with a sedative. The doctor and the medical team then left the room in which Brown was kept, but came back later once a police officer realized Brown did not have a pulse. The woman was eventually transferred to a hospital and died on April 18, 2013, after spending 10 days in the intensive care unit.

The court has postponed the hearing to a later date to give time for the defendants’ lawyers to prepare their defense.