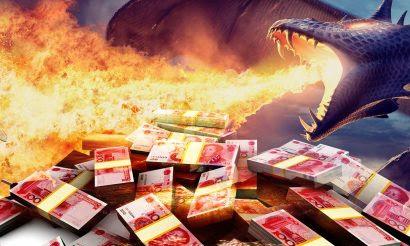 Beijing knows ‘there is no bailout too big to avoid a crisis,’ which would bring down the ruling Communist Party government

China’s mounting pile of debt frequently evokes “tsunami” or “Titanic” metaphors. But the country’s financial problems are very real and the result of unrelenting credit creation since the Great Financial Crisis of 2008.

As the International Monetary Fund put it in a report early this year:

“International experience suggests that China’s credit growth is on a dangerous trajectory, with increasing risks of a disruptive adjustment and/or a marked growth slowdown.”

Indeed, in his book China’s Great Wall of Debt, Dinny McMahon pointed out that “between 2007 and 2015, China was responsible for 63% of all new money created globally.”

It is a credit boom that has touched every aspect of the Chinese economy – from rural households to overnight “unicorn” tech startups.

It has also led to rampant local government and corporate debt, which is larger than any other in the world at US$18 trillion or 169% of GDP.

Meanwhile, the economy continues to slow, equity markets are melting down and a trade war is battering the private sector. Tariffs worth $250 billion have already been slapped on Chinese imports entering the United States, with a further $250 billion threatened.

In a rare public indication of the seriousness with which Chinese officials take the overall situation, Wang Yiming, a vice-minister of the Development Research Center of the State Council, a top government think tank, said that China should be “prepared for the worst,” according to a report in the Beijing-based Caixin media website.

If the Trump administration moves ahead with all of its threats, tariffs on Chinese goods will exceed last year’s exports of $505 billion to the US, which could cut China’s GDP growth by 1.5%, Wang said.

This would be politically unacceptable to Beijing, which has made a commitment to maintaining a 6.5% annual growth target until 2020, leading to speculation that the government will embark on yet another massive stimulus push at the same time it is trying to reign in local government spending.

In a tug-of-war between Beijing and uncountable far-flung local governments, President Xi Jinping’s administration has been urging them to move away from off-balance-sheet sources. But local government financing vehicles appear to offer the irresistible lure of making bold things happen in places that would not otherwise be able to afford them.

S&P Global Ratings has reported that Chinese local government debt may amount to $5.78 trillion, meaning the country’s debt-to-GDP ratio has hit “alarming” levels, and that it expects the authorities to allow local governments to default. But, given the unknown scale of the problem, this is speculative.

Cascading defaults countrywide could easily become uncontainable and the consequences are unknowable other than they would likely be disastrous in terms of maintaining the trust required to sustain the economy at all.

In a measure of the excess and sheer absurdity of local government spending, McMahon writes:

“In 2013, plans for new cities and new districts were sufficient to house about 3.4 billion people, more than twice China’s total population.”

And it is China’s population that is likely the little-discussed wild card in the country’s litany of economic woes. In a country renowned for its thrifty savers, household debt has been quietly mounting.

To put that into perspective, it is more than double the amount in 2011. When mortgage lending is thrown into the mix, total Chinese debt was 35.6 trillion yuan as of August.

This is in contrast with the government position just two years ago, when it encouraged increased borrowing and spending on items such as cars and homes, to boost consumption and investment.

At the G-20 summit in February 2016, China’s Central Bank Governor at the time, Zhou Xiaochuan, remarked that rising household leverage had “a certain logic to it.”

Today that would appear to be less the case, and a vivid example of that is the widening gap between the growth of debt and consumption. Official data show consumer loans have increased by 21% during the past year, while the expansion of national retail sales has slowed to a record low of 9.4%.

Nonetheless, the China Banking and Insurance Regulatory Commission has called for banks to grow their consumer credit business to “meet people’s demand for funds to spend on goods and services such as tourism, education, health care and elderly care.”

It does not quite add up and some senior Chinese economists have gone as far as to suggest so.

The concern is that ordinary Chinese are using loans for down payments on homes or to help pay monthly mortgage bills, or worse still making speculative investments in the struggling equity markets.

Is the result likely to be a much-considered meltdown of the China powerhouse? Many analysts think it unlikely with economist Christopher Balding, who taught at Peking University’s HSBC School of Business in Shenzhen for nine years, recently remarking in a tweet that he thought the risk of a full-blown crisis was “low.”

The risk then, of course, is that the victims of China’s mounting household debt problem become victims of a government that will stop at nothing to keep the economy afloat, raising the specter of widespread civil unrest. For all its grandiose statements on socialism with Chinese characteristics and unity, the only real compact with the people in President Xi Jinping’s China Dream is continued prosperity.