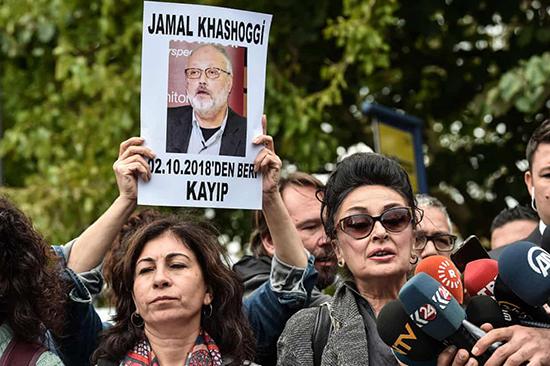 Bethan McKernan in Istanbul- The Guardian

The death of journalist Jamal Khashoggi inside the Saudi consulate in Istanbul has shocked the world both for its reported brutality and the continued lack of answers, as Ankara, Riyadh and Washington struggle to leverage the diplomatic fallout.

For many Turkish journalists, the seismic impact of the dissident writer’s killing is reflected by how the Turkish president, Recep Tayyip Erdoğan – the globe’s most prolific jailer of journalists – has been able to paint himself as a crusader for truth and justice in the face of Saudi Arabia’s inability to come up with a clear explanation.

“But since the [failed 2016 military] coup he has jailed hundreds of journalists, and many more have lost their jobs. He’s closed down outlets or turned them into government mouthpieces. Now we’re supposed to believe that he cares a single journalist was killed?”

Tanir, who now edits banned website Ahval, which is critical of the government, knows the risks better than most: last week, Ankara issued an Interpol red notice for his arrest.

“They accused me of being a Gülenist and spreading terrorist propaganda,” Tanir said, a reference to Fethullah Gülen, a Pennsylvania-based cleric whom Turkey accuses of masterminding the unsuccessful coup.

“I’ve lived in the US for almost 20 years and never even met him. Every interview request I’ve put in for the guy was turned down.”

Don’t mistake this for journalism. It isn’t. It’s a means to an end

Journalism has always been a partisan endeavour in modern Turkey. But the country’s once “colourful media palette” has become duller and duller as Erdoğan’s AK party has achieved electoral success over the last decade, said Özgür Öğret, the Turkey representative for the Committee to Protect Journalists.

“Press freedom is a fundamental problem here, although since the 2016 coup attempt, we’ve seen a crackdown like never before,” he said.

“The media that is left now is totally obedient to Erdoğan. Outlets that used to be mainstream have been bought up by pro-government businessmen.

“There’s a small drip of outlets that still do critical journalism. But they are a drop in the ocean of pro-government coverage.”

Turkish media outlets have proven to be an indispensable tactical instrument for Erdoğan’s handling of the Khashoggi affair.

The slow spoon-feeding from officials of lurid details of the killing and damning surveillance camera footage to Turkish papers and television has slowly and surely turned up the pressure on his rivals in Riyadh, undermining Saudi Arabia’s version of events without officially revealing the existence of any Turkish spying or hacking operations.

Stories carried in the outrageous tabloid Yeni Şafak would normally be dismissed by western outlets as not credible. But almost all of its claims, as well as those in the slightly more respectable and widely-read Sabah, have subsequently been verified by western media.

Yeni Şafak in particular – normally fond of labelling foreign journalism as anti-Turkey propaganda efforts – has been delighted with how its stories have been picked up by other outlets around the world.

“I am happy that Khashoggi’s murder has been so widely covered and that these papers, and Erdoğan, are going after the perpetrators,” said Tanir.

“But don’t mistake this for journalism. It isn’t. It’s a means to an end. A Qatari journalist murdered in the Qatari consulate would not have received the same attention.”